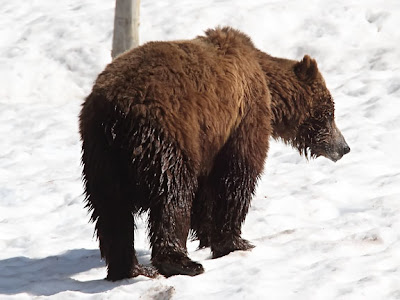 Yellowstone National Park is home to approximately 600 grizzly bear. Yellowstone is also the destination of over 4 million tourists each year. Most of the time interactions between the bears and humans is exciting and safe, with cars lining the side of the road at the sight of a bear. This week however things were not so safe at Yellowstone. On this past Wednesday a California man was killed by a bear while hiking with his wife in the park. It is the first time that a human has been killed by a bear in Yellowstone since 1986. 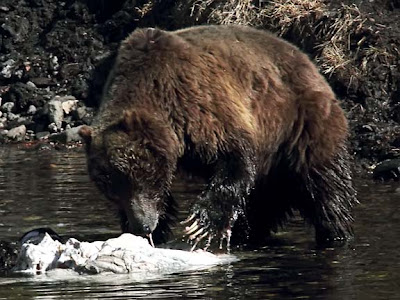 Although the grizzly is the top predator in Yellowstone they are most often wary and avoid contact with people. Even though they have a size advantage it is extremely rare that a grizzly would consider a human as prey. Most grizzly attacks are the result of a person walking close and surprising a bear. This is compounded when the bear is a sow with cubs. About 70% of all fatal attacks come from mothers who are protecting their cubs. In this case the hikers did surprise a mother with two cubs. 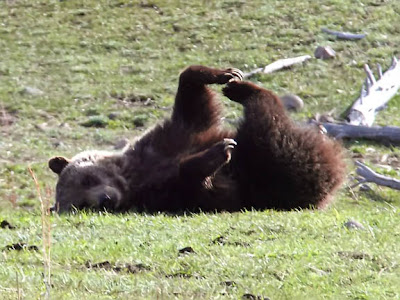 It is unfortunate that someone died as a result of this encounter. We do not usually go hiking in the back country at Yellowstone but we have been told to make sure and where bells or make noise so that you do not accidentally startle a bear. If you are attacked the proper procedure with a grizzly is to play dead. The second hiker was not hurt as the bear grabbed her by her pack and she played dead. Usually when a bear attacks a person the bear is captured and euthanized. In this case though it is believed that the bear was just protecting its cubs, a normal reaction for a bear so they do not plan on punishing the bear.

I'm glad the authorities realized it was just an act of protecting her young. We hate to hear of such news as this.

I'm glad to hear that the bear is not going to be killed. We enter their habitat at our own peril.

Wonderful bear shots! So sorry to hear about the fatality.

Dreadful for the hiker and his wife, but if he had been told to wear bells and didn't, thus surprising a mother with cubs, the bear was only following her deepest instinct. I've always called such a reaction "mother bear instinct" for a very good reason.
The cubs would be the ones being "punished" if their mother were euthanized for protecting them, and what a travesty of justice that would be.
Your photos are super. As something of a mother bear myself, I love the third photo. My late father, an outdoor writer who never surprised a bear in his life, would have liked the second.
— K

Twenty-five years with no casualties is a good record considering the stupidity or recklessness of some people.

absolutely outstanding shots!
thanks so much for sharing.

have a great weekend!
betty

i love your blog!

It's a sad story but I do feel humans need to be more responsible if they want to hike in a wild area.

A sad story.Similar incidents happen in India from time to time with elephants. Your photos are superb.