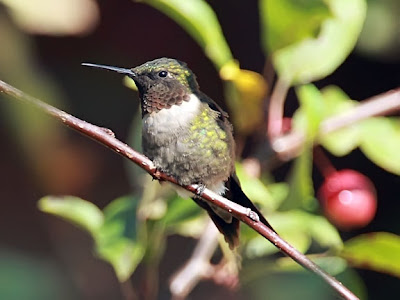 The ruby-throated hummingbird is the only hummer that breeds in the eastern half of North America. During the breeding season these hummers can be found from southern Canada south to the gulf coast. During the winter they migrate down to Central America. 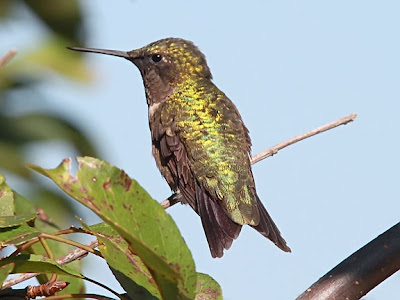 Hummers are a member of the order Apodiformes. Apodiformes means footless in Latin. While hummers are not footless they have very small legs. The legs of the ruby-throated hummer are so small that it is almost impossible for them to walk or hop. Instead of hoping or walking like other birds hummers often hover and then dart to a new location. Their wings beat on average 52 beats per minute and they can reach speeds of 63 mph in a dive or 50 mph in escape mode.

Isn't she the sweetest thing? I love my hummers. We've had pretty crummy weather and they don't seem to be around as much, however the feeders keep emptying on a regular basis. I had one last summer with a big black spot on her belly. Sure enough, she showed up again this year! I was so excited! ~karen

They are gorgeous birds and I envy all the people who can have a hummingbird feeder on their porch.

Beautiful photos.
I never knew hummingbirds couldn't hop or walk. Thanks for adding to my education.

We've got an adorable pair of ruby-throated hummies at our cabin in the Southern Catskills of NY. But we've never seen them in NYC proper.

Oh my, that is a very beautiful bird, great photos!