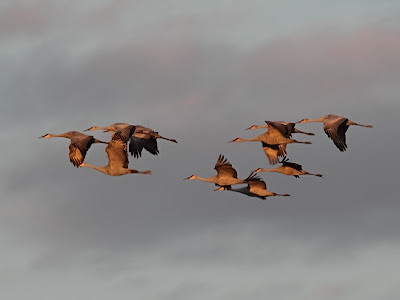 Sandhill cranes are very interesting birds. During the day they are often found out in the fields eating grains, seeds and some insects. At night instead of roosting in trees like most birds, sandhill cranes usually roost in shallow pools, ponds, lakes or rivers, as long as they can stand above the water on their long legs. The water gives them an early warning system against land based predators. During migration tens of thousands stop at the Platte River in Nebraska, eating during the day and returning to the river at night. Up at Crex Meadows it is the same situation, only on a smaller scale, as the cranes stage there for the fall migration. So as the sun begin to set if you are in the right location you can take some really cool pics.

How much beauty they add to the skies! Superb capture!

beautiful photo with that lighting, thanks for sharing with SWF

Amazing creatures beautifully shot. Some years ago I was lucky enough to see a group of around 300 whooping cranes near Gainsville Fla. Unforgettable!

Looks like you were in the right location for this cool pic alright.
And I love the baby burrowing owls in your previous post. I know there are burrowing owls around here but I've never seen one.
— K

That is so cool! I love the pinkish tones the sunset gives the birds!! We have redwing blackbirds massing like that near the house, for their migration.

You did catch the lighting at a magical moment!

I love sandhill cranes. What a great shot for Skywatch Friday!

wow... they look gorgeous with the light on them like that!

Lovely to see these big birds embellishing your sunset sky.

Wow! that is perfectly captured photo of flying birds!

Late visit here for SWF. Followed your blog as well, hope you can do the same ;)