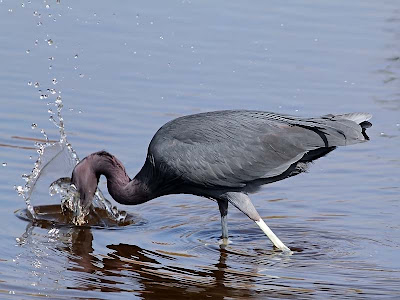 The little blue heron is a small heron found in the southeastern United States, Mexico, Central America, and portions of South America. Although they are usually found in coastal areas they prefer to live in fresh water habitats such as ponds, lakes and marshes. Their diet consists of fish, crustaceans, frogs, and aquatic insects which they slowly stalk through the water. Once with in range they lunge quickly and jab the prey with their long beak. Several studies suggest that their success rate is about 60%. This heron, that I photographed at the South Padre Birding and Nature Center in Texas, was successful but the prey must have been pretty small since he had it swallowed before I had a chance to see what it caught.

what a great capture. small or not, it's still dinner :)

Wow, caught in the act, but was that enough for dinner? Such an interesting photo.
Rosie

Great shot!! They are so beautiful, aren't they?

Great shot with a lovely "watersplash " ;)