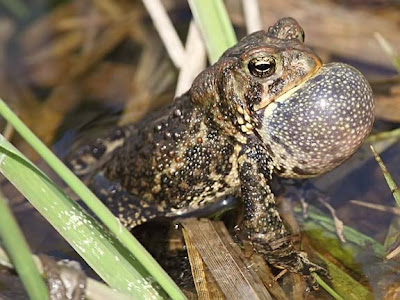 The American toad is a common amphibian found in the eastern half of the United States and Canada. They have lungs which they use to breathe but like other amphibians they need to keep their skin moist. They are found in a variety of moist habitats where they hunt mostly insects, snails and slugs. To help them avoid predators they can produce a toxic chemical from special glands called paratoid glands. 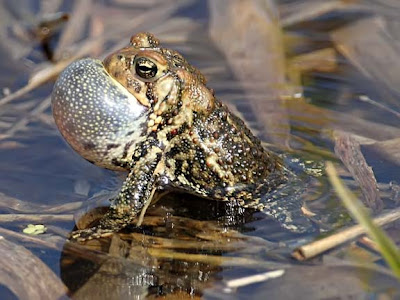 In the spring male American toads begin to look for an eligible female with which to mate. They will sing to the females by expanding the pouch in their throat, called a dewlap, and making a call that sounds similar to that of crickets. Willing females will swim out to the male and they will mate. The female will then lay her eggs which will attack to aquatic vegetation. About a week later the tadpoles will begin to hatch. I took these photographs in April as the mating season began.

Posted by Ecobirder at 8:18 PM

Great camera critters from you, always! I sure enjoy them.
Wishing you and yours the best for the coming year!
K

Great shots and info about the American toad!

Really fun post and terrific captures. I've only heard them so seeing them is a treat.