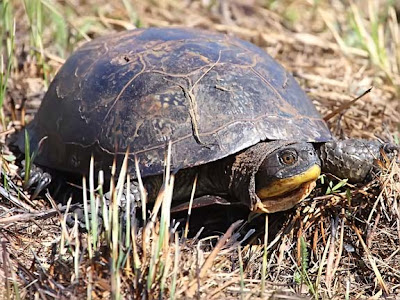 The Blanding's is a rare turtle that can be found in the Great Lakes region of the United States. While these turtles were once more common through out much of the eastern U.S. they are now limited to several Midwestern states and southeastern Canada. Even in most of these areas the Blanding's turtle is listed as an endangered or threatened species, even though it is not nationally listed in the U.S. In Minnesota they are found in the eastern part of the state and they are listed as a threatened species. 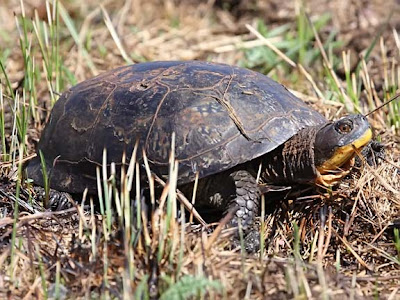 A big part of the problem that Blanding's turtles are facing comes from the fact that it takes them about 12 to 14 years to mature. This makes it difficult for the turtles to make up for any population losses. They make up for this by living up to about 80 years. Unfortunately because much of their habitat has been fragmented, because of people developing the land, their mortality rate has been increasing. Both eggs and young have been affected by increased predation, approximately 93% mortality rate. While adults are frequently hit and killed by cars, especially females who travel away from their wetland homes to look for a sandy location to dig their nest.

Posted by Ecobirder at 6:27 PM

They are beautiful - nice detail on the shell and the head. Good information too.

Thanks for sharing. Great shots! Sad that they are endangered.

What a cute fellow!

Such neat creatures. It's a shame their habitat is disappearing.

I hope they make a comeback. Lovely little fellow.