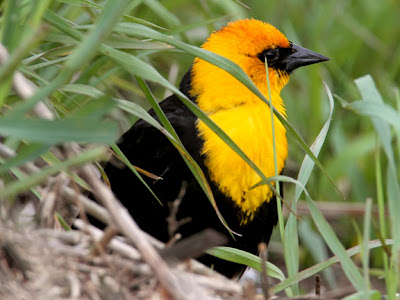 In all of the alphabet there are only a few letters that are difficult for me to find a picture to represent. X is one of those letters. Fortunately it is a bit easier to find a scientific name that begins with an X. Xanthocephalus xanthocephalus is the scientific name for the yellow-headed blackbird. The yellow-headed blackbird is more closely related to meadowlarks then it is other blackbirds that is why it is in its own genus Xanthocephalus instead of Agelaius or Euphagus like most other blackbirds. 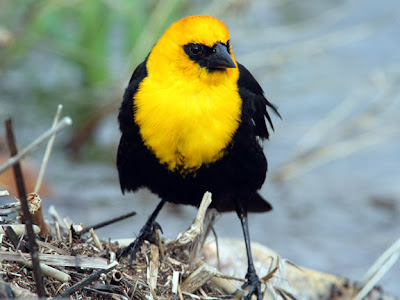 Beautiful birds with incredibly long names. I think you are the winner for the X word choice.

You can also use this picture for next week! Great X contribution!

I'll never forget the first time I saw a yellow-headed blackbird. I'm from the west coast, and our part of Alberta here doesn't have prairie wetlands, so we were in the car when I first saw them. I thought I was imagining things!
Your photos of them are spectacular. I also enjoyed your blog post about the loss of wetlands around the world. It is a big problem in British Columbia, I know, because people think nothing of building on bogs, wetlands, and fertile farmland.
Wishing you and the all-important wildlife habitat the very best for the coming year.
K

such beautiful photos - and what a mouthful of a name

I think I saw one of these many years ago when we lived in Canada.

What a beauty he is with his bright color!

i love that yellow.