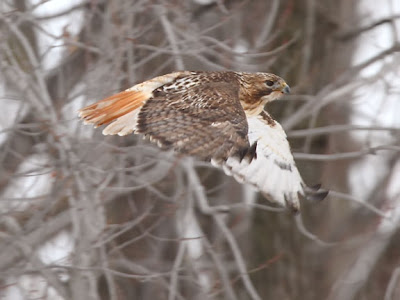 Probably one of the most common raptors seen through out North America is the Buteo jamaicensis, or red-tailed hawk. The red-tailed hawk is a large stocky hawk which is a member of the Buteo genus, which encompasses the soaring hawks. The typical wingspan of a red-tail is just over four feet long and average weight is about two and a half pounds. They are found through out all of North America except for extreme northern Canada and Alaska. 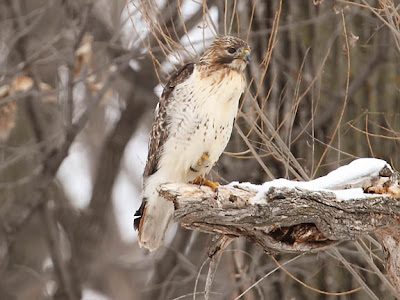 Red-tails have been able to adapt quite well to a variety of different habitats. This may be due in part to the fact that they hunt and eat a wide variety of prey. They are an ambush hunter. They can typically be seen perched in a favorite spot waiting for prey. When they spot something that looks like it would make a good meal they drop down and ambush the prey. Where I live we typically see many of them on light poles on the sides of highways and freeways. This is great hunting habitat for red-tails. The lack of large trees by the side of these roads enable the red-tails to fly unencumbered. The light poles make an excellent hunting perch and garbage thrown from cars attract a good supply of rodents to eat. While people have negatively impacted many different species of wildlife it is good to see that some species, like the red-tails, have not only adapted to survive in harmony with people they actually have seemed to thrive.

How on earth did you capture that first photo? Really incredible, and really enjoy the educational component of your blog.

We see the same thing happening up north of the Cities where the hawks seem to each have their own pole.