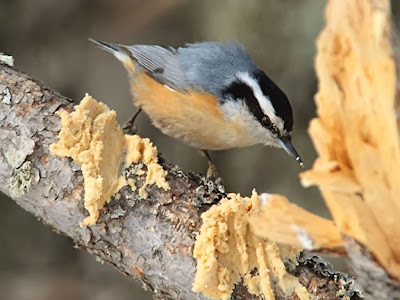 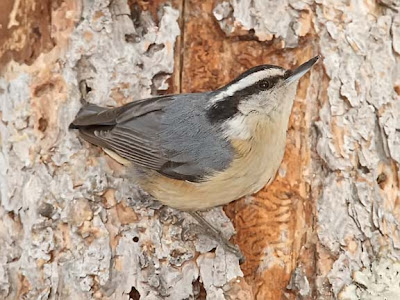 Nuthatches are woodland birds. They are often seen climbing down the trunks of trees upside down. They eat mainly insects during the warm months, many of which the glean from the bark of the trees. During the winter they switch to a diet of mainly seeds. They will even cache some during the summer and fall in preparation for winter. They are a cavity nester and will aggressively defend their nesting cavity from other birds. They will often line the whole of the cavity with tree sap which helps to prevent larger predators from entering the nest.

Visiting for RT! Here's mine- hope you can visit too:)

pretty bird, loved it :-) visiting for Ruby Tuesday, hope that you can return the favor too.

jw - what is that tan stuff on the branch in the first photo of the nuthatch? Is that peanut butter?