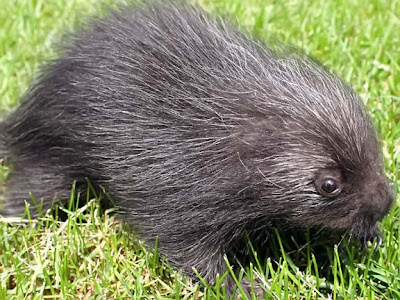 Porcupines are members of the rodent family. Their are about 24 different species of porcupine around the world but the North American porcupine is the only one that is found in the US. The term porcupine comes from Latin and it means "quill pig". Porcupines are covered in hair and mixed into the hair at strategic locations Are sharp barbed quills. These quills are a defense mechanism. The porcupine can make them stand up rigidly and impale any predator that might mess with them. 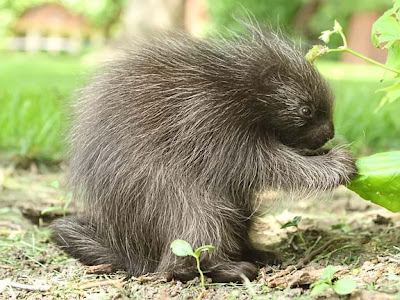 Here in North America the porcupines spend much of their time in the trees. They are very good climbers which is helpful since most of what they eat can be found in the trees. Porcupines are herbivores and eat a mix of bark, leaves, buds, and fruit. One of the main causes of fatalities of porcupines are cars. Since porcupines are crepuscular they are most active at dusk and dawn. This often makes them difficult for drivers to see when they decide to cross a road. That was the issue with this young porcupine. Its mother was hit and killed by a car. The orphan was being cared for by a rehabilitator which is when I had the opportunity to hold and photograph it. From what I understand it ended up going to the Minnesota Zoo.

Posted by Ecobirder at 6:54 PM

Great post... cute little guy, isn't he? Never seen a porcupine, so I enjoyed the information.

it is adorable! glad it was saved.

He's so cute! I am so thrilled that this little guy was saved. I feel so bad for his Momma.

What a little cutie! I'm glad he was rescued.

Lucky there was someone there to take care of it. Very cute little critter.

I agree with Antonette, I feel sad for the mother, but glad the baby was rescued. I understand the quills aren't at all sharp on the baby ones. I'd love to hold one some day. I've only ever seen porcupines dead beside roads. So sad.
K