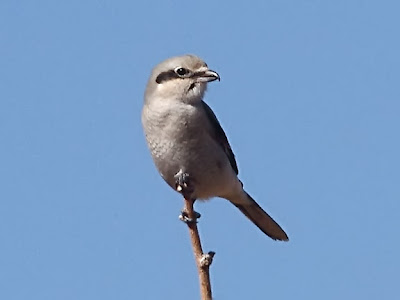 The northern shrike may appear to be just another songbird but if one shows up to your feeders it is not there for the seeds. The scientific name of the northern shrike is Lanius excubitor which translates as "Butcher watchman." The northern shrike is a predator. It eats insects, mice and small birds. It hunts by perching on an exposed branch and then ambushing its prey. It does not have strong feet with talons like the raptors so it catches it in its beak to catch its prey and then it will often impale the prey on a stick or barbed wire to hold the prey while it uses a notch on its beak to severe the spinal cord. Often they will take more prey then they can eat and then cache the extra away for leaner times. As there name would suggest these birds are found in the northern portion of North America. They breed up near the arctic circle in Alaska and Canada and then winter in southern Canada and the northern half of the United States. This bird was wintering at the Alamosa NWR in Colorado which is where I took this pic.

it is a year ago since I saw a shrike. Nice catch.

Nice catch! I haven't been able to shoot a bird with such a close up distance though. They are very aloof to people :)

Wonderfully sharp photo. The beak does look a little like a raptor beak, doesn't it. Thanks for educating me.

Nice photograph. and thanks for the Latin translation. There is some pretty interesting information hidden in the Latin names of a lot of species but the Shrike's seems quite appropriate. Did you get to see it hunting? I've only seen them a few times and every time it was just sitting on a fence post watching us.