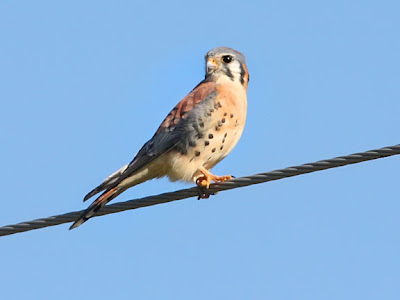 Falcons are raptors that are in the genus Falco. There are 37 different species of falcons found around the world. Most falcons have several similar features. They have thin tapered, or pointed wings. Most also have markings under their eyes called malar stripes. Falcons are usually split into three loose groups. The smallest falcons are kestrels. Kestrels eat a combination of birds, small rodents and insects. Males and female kestrels often look very different with the males being much more colorful. In North America we have one kestrel and it is called the American kestrel, see photo above. 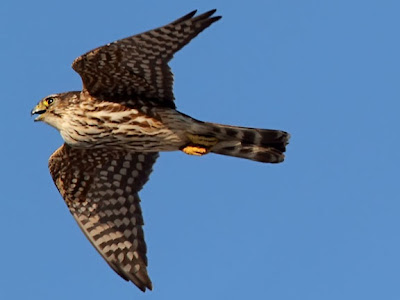 Next are the medium sized falcons. In Europe, Asia, and Australia many of the mid sized falcons are called hobbies. In North America we have a few medium sized falcons the most common of which is the merlin falcon, pictured above. Merlins are a circumpolar species that are found in the northern hemisphere of North America, Europe and Asia. They are primarily a bird hunter, using their speed and maneuverability to chase small birds though the air. They will also eat small rodents and insects, but birds typically equal about 80% of the average merlin's diet. Like most falcons merlins do not build a nest, typically they will use an abandon nest, such as a crow's nest, to raise their young. 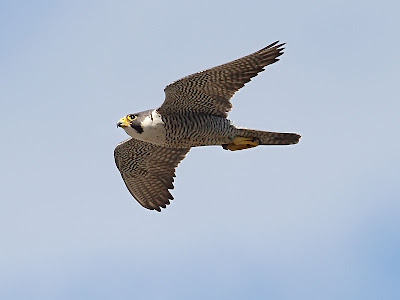 Probably the most well known falcon is the peregrine falcon. The peregrine is part of the group of larger falcons. Peregrine can be found on every continent in the world other then Antarctica. They are almost strictly bird hunters. They catch their prey by diving at them at speeds of over 200 miles per hour. Here in Minnesota peregrines were almost extirpated in the 1950's and 60's by the chemical DDT. Fortunately DDT was banned in the U.S. in 1972 and through release programs in the 1980's the peregrine has made a complete come back. Unfortunately not all peregrine populations are so lucky since DDT is still used in some parts of the world.

Enjoyed the photos and the informative narrative. Thanks!

Loved reading the info on these beautiful birds. Great photos of the ones in flight!

LOVE peregrines ever since I was in college and we had an expert named Heinz Meng at the campus.

I really enjoyed this posting and the pictures are great....I wish we had a more social blogger birding group like a forum or google group or something.

You always give us such great information and pictures. thanks for the work.
I often see Kestrels diving out in the fields. They are beautiful small birds.

A very interesting post and great photos of all the falcons.