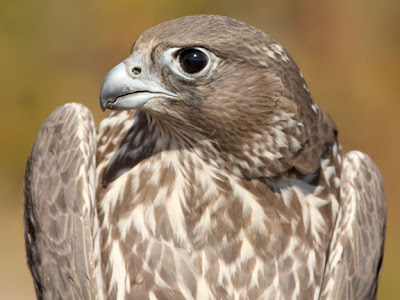 The gyrfalcon, pronounced "jerfalcon" is a large falcon of the far north. In length and weight they are slightly larger then an average red-tailed hawk, although their wingspan is generally slightly shorter then that of a red-tail. Gyrfalcons are a circumpolar species living primarily along the arctic coastlines of Alaska, Canada, Europe and Asia. During the winter they do migrate south into northern Europe, Asia, United States and Southern Canada. This young gyrfalcon was caught and banded, while migrating, at Hawk Ridge where I was able to photograph it. 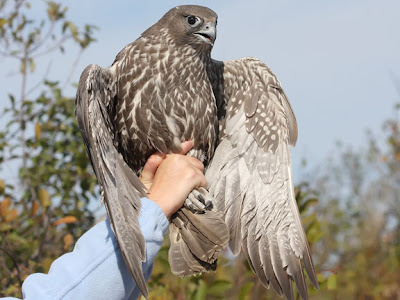 On there northern breeding grounds the gyrfalcon hunts primarily ptarmigan, a ground-dwelling bird that is similar to a grouse. They will also eat other birds, such as gulls and ravens, and mammals, such as ground squirrels, lemmings and hares. They hunt vertically by chasing down their prey, instead of diving like a peregrine. They compete for prey with snowy owls and golden eagles, the later being their only natural predator. Females will sometimes cache food by their nest which is often just a scrape on a cliff ledge or a borrowed nest from an eagle or raven. 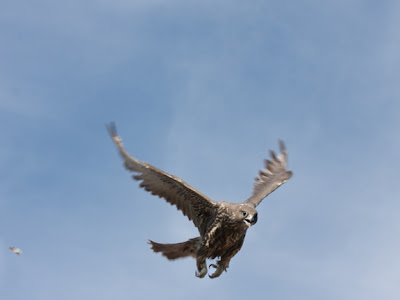 Gyrfalcons have long been used in the sport of falconry, hunting using a raptor. In ancient times they were very rare and sought after. In medieval times gyrfalcons were reserved for the king, thus earning it the nickname the King's Bird. In China it is rumored that the Jurchen rebellion that over threw the Liao Dynasty began because the nobles demanded that the Jurchen tribes procure them gyrfalcons. This gyrfalcon flew free after he was banded. It was only the second gyrfalcon banded at Hawk Ridge.

Really nice information. I love how the capture of the bird in flight. One more to learn about:)

Such powerful amazing birds. I didn't know that they captured in flight and not like the divers. Thanks for the interesting info and photos.

That's equivalent to someone doing the grocery shopping for me and bringing it home! Sign me up! Yet another beautiful bird and I loved learning more about it. And, the bald eagle shot in the other post is spectacular!

On behalf of the ABC Weds team, thank you for your participation this week!

First time I have seen a photo of a gyrfalcon!! I have mostly encountered them in books! Beautiful bird!

many thanks with regard to revealing. i used to be trying to find as well. RS GoldBuy Diablo 3 Items