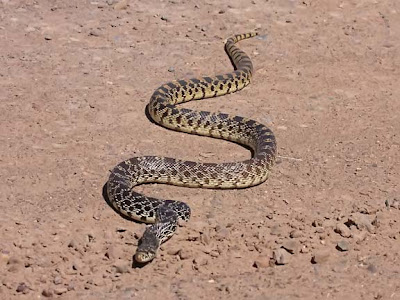 The bull snake is the largest snake found in Minnesota and one of the largest in North America. An average adult is approximately five to six feet long with some reaching over eight feet. They are found in the central portion of North America from southern Canada down to northern Mexico. 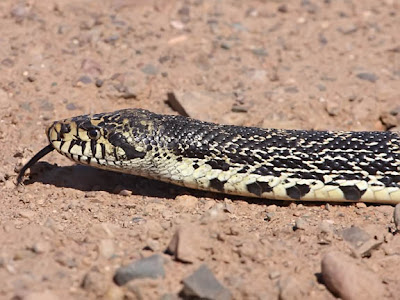 Bull snakes are not venomous. They kill their prey, typically mice, rats, ground squirrels, rabbits, lizards or ground dwelling birds, by constriction. When confronted by a larger predator they will usually make themselves look larger and imitate a rattle snake by quickly beating their tail against the ground making a sound similar to a rattlesnake. As with all snakes the bull snake uses its tongue to collect chemicals from their surroundings which helps them identify their environment.

Posted by Ecobirder at 9:10 PM

Great pics! Looks almost like a diamondback rattlesnake, but the head isn't triangular and he doesn't have rattles. Still, if I saw one of these, I'd have a heart attack!

Wow, great pic of the snake. I leave all snakes alone now.

Great photos. Bull snakes are very common where I live. Their coloring is very similiar to a rattlesnake, so I don't take may chances!

In contrast to rattlesnakes, which usually keep their tail elevated in order to sound the most efficient rattle, bullsnakes tend to keep their tail in contact with the ground, in order to beat it against something to make a sound.
Have a nic week. Greetings from Romania.