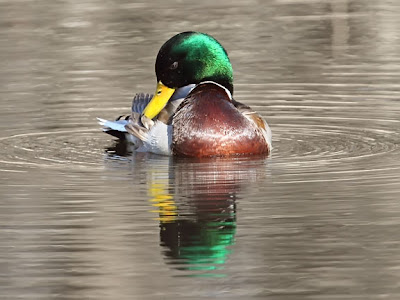 The mallard duck is probably one of, if not the most, common and well known ducks. They are found through out much of the northern hemisphere, including North America, Europe and Asia. They are a dabbling duck which means that they are usually found in shallow wetlands where they can be seen dipping their heads under the water to eat aquatic vegetation and invertebrates. The mallard has been introduced into many areas that it is not native to and in some cases, such as the Hawaiian Duck, it has evolved over time to be classified as a different species.

Posted by Ecobirder at 2:04 AM

What a wonderful little portriat of the mallard. Love the way the light gleams on his head and breast and then that perfect eddy surrounding him. Love the jewel colors of this bird.