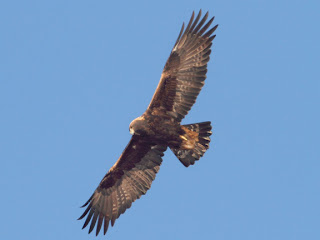 This weekend I am hoping to make a trek down to southwestern Wisconsin in search of golden eagles. Golden eagles do not nest here in Minnesota and Wisconsin but there is a population that spends the winter here. I guess our harsh Minnesota winters are like Spring Break compared to the winters where they breed up in northern Canada. Each year we do a survey in January to count the gold eagles. Last year we had our highest count with around 150 birds. This year might be another good year since many golden eagles were counted as the migrated past Hawk Ridge in northern Minnesota this fall. They seem to be somewhat territorial even during the winter season. They typically return to the same territory year after year which will be good for me as I identified around 10 different territories last year. I did make a trip down into the area a few weeks ago in search of eagles with out much luck but that was before our first snow. By now I am hoping that more of the eagles have settled back into their territories and I will be able to get some more nice pics like the one above that I took last December.

I still have not had the pleasure of seeing a Golden Eagle in the wild. There are supposed to be some around (Vancouver, B.C.) but I guess I have to make a bigger effort to seek out their nesting territory. Yes, I hope you get lots of fine photos this year. The one you posted here is wonderful. Guess you have see this video of a Golden Eagle picking up a child in Montreal.

Hi again.. just thought I would let you know that I just saw on the news that the video link I sent you was faked. Some students had an assignment to make a video that would go viral and I guess they all earned "A's" since it had a hits.

Safe travels Jeff and I hope you are successful in your hunt..amazing birds.. Thank you for linking into this week's Nature Notes..Michelle

Good luck in your search for Golden Eagles!