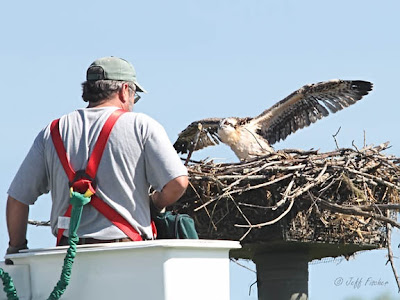 Over the years I have had opportunities to view numerous types of bird banding. Back in the summer of 2010 I was fortunate to be able to photograph osprey banding at several nests around the Twin Cities. Most of the banding took place at nests that were located on osprey platforms. In some cases a climber was hired to climb up to the nest to get the chicks otherwise a basket lift was used. It is important to get the chicks at the correct age, about 5 weeks old. If they are too small the shock of banding may affect their health. If they are too large they might try and escape and hurt themselves or they might try and fight and hurt the bander. This chick had a lot of bravado but it was still young enough for the bander to easily handle. 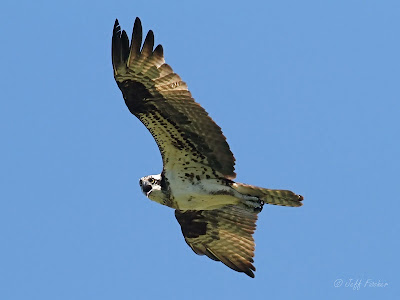 While the banders are grabbing the chicks from the nest the parents fly around the nest calling loudly. To them this is an invasion, from a large predator, and their babies are in danger. Besides screaming they also will dive at the bander. They usually do not get close enough to touch the banders but it is important to be careful  because they have very sharp talons. At the end of the day, when the chicks are placed back into the nest and the banders leave, the osprey will be successful and they will have saved their chicks. 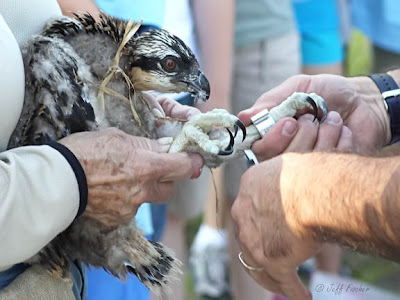 Once on the ground the chicks are kept in the shade. Banding here in Minnesota takes place at the beginning of July so it can be quite warm. Since they are already stressed out because of the banding it is important not to let them get too hot because it might affect their health. The chicks have two bands crimped on to their legs. on their left leg they get a silver Us Fish and Wildlife band. This band number is recorder at the Bird Banding Lab in Washington DC. THE right leg is banded with a colored alpha numeric band which is much easier to read through binoculars or a scope then the silver band. This helps different groups, such as the Audubon Society, Three River Park District or other interested organisations identify the birds in the field. 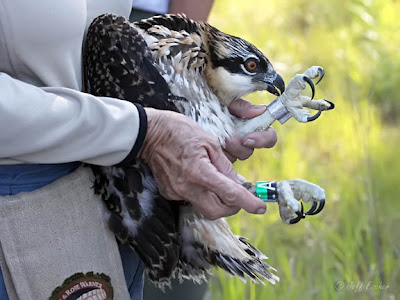 Although they were at one time plentiful through out the state of Minnesota, the osprey had all but disappeared from the southern half of the state by the early 1900's. In 1984 the Hennepin Parks Association,  now the Three Rivers Park District, began a release program to reintroduce nesting osprey into the Twin Cities Metro area. They set up osprey nesting platforms in suitable habitat and began to release young birds that had been taken from northern Minnesota. Over an eleven year time frame, 1984-1995, they released 144 young osprey into the area and put up around 100 nesting platforms. Many of these birds returned to the Twin Cities after migration and when they reached maturity, 3-4 years, they began to nest in the area. In 2010 their were over 60 active nesting territories in the Twin Cities and the number has continued to grow. Around 85% of the population is banded.

Posted by Ecobirder at 4:37 AM

What a fascinating and interesting post. I think if I were the mom, I would be upset, too. The chicks are so cute and wide eyed. I know you were thrilled to be on site when the banding was taking place. Great shots as always. genie

Interesting post with fabulous photos. I would love to be at a bird banding especially a raptor banding. Thank you for linking this with Nature Notes Paul... Michelle

Getting a bird like that in the hand would be great - I will have to make do with lots of waders over the next few months!

Very interesting and informative. Thanks!

[p]Each ring is made of 92 . We have said above that Pandora beadsare available in various types, but some Pandora beads meanings are somewhat obvious . If this [url=http://www.linksoflondonbraceleted.co.uk]links of london jewellery sale
[/url] hallmark can be seen on the jewelry, then it means that it is an authentic piece of jewelry . The unique bracelets the fact that combine tanners brown, dark brown and ebony leather with sterling silver are a different take for accessories meant for men . Those also add a very different touch of classic style to whatever you happen to be making . The choice of bracelet was quite simple in comparison with the charms . Till now, a European jewelry set for Christmas [url=http://www.linksoflondonringuk.co.uk]links of london uk[/url] is finished . The glass beads that come in different shapes and types, the heart symbol or alphabetical charms or maybe a smaller pendant, almost everything worn in model also on the idea stated previously mentioned is bound to make "love" results . de finden Sie jegliche Arten von Anh?ngern, die das [url=http://www.linksoflondonbraceleted.co.uk]links of london bracelet sale[/url] Schmuckliebhaber-Herz begehrt.[/p][p]Choose some other European beads to [url=http://www.linksoflondonbraceleted.co.uk]links of london jewellery[/url] create your own lovely jewelry pieces . All [url=http://www.llinksoflondon.co.uk]wholesale links of london[/url] charms are handmade and of top quality . Today, many men are opting your thomas sabo sale uk Pendant . Which results in that my dose of suggestions to those who sadly are contemplating jones sabo wristbands jewellery as a thoughtful present to your dependents with any personal day are probably to without any doubt go study their unbelievable series . String these beads as a lampwork bead, a dangle bead, an antique silver metal [url=http://www.linksoflondonbraceleted.co.uk]links of london sale[/url] bead and one more lampwork bead . So handmade jewelry is a good way to show how special you are . Are you specifically looking for very long sterling silver curved tube beads to make that perfect necklace design with? Looking for these is a snap! Most suppliers do carry sterling silver long curved tube beads for this purpose . 隆卤 A perfect design for a charm addict, a compulsive shopper or those seeking a little self indulgence.[/p]

Visit for any Online Jobs from Home
OnlineJobs