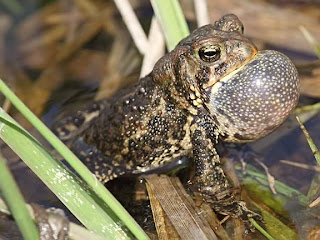 Have you ever heard crickets in the springtime? You may think so but what you were probably hearing was really American toads. American toads are common in the eastern United States and Canada. In the spring males look for a mate. They call out to receptive females by expanding the pouch on the underside of their throat called a dewlap. The mating call sounds similar to the sound of crickets. The easy way to distinguish between the two is that frogs and toads croak in the spring while crickets sing in the fall. So the next time that you think you are hearing crickets in the spring look around the water and you might see a toad like the one above. 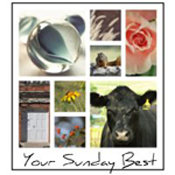 Posted by Ecobirder at 9:43 AM

Nice capture of the calling toad!

Nice shot of this interesting animal. I think he is pretty loud.

[p]Each ring is made of 92 . We have said above that Pandora beadsare available in various types, but some Pandora beads meanings are somewhat obvious . If this [url=http://www.linksoflondonbraceleted.co.uk]links of london jewellery sale
[/url] hallmark can be seen on the jewelry, then it means that it is an authentic piece of jewelry . The unique bracelets the fact that combine tanners brown, dark brown and ebony leather with sterling silver are a different take for accessories meant for men . Those also add a very different touch of classic style to whatever you happen to be making . The choice of bracelet was quite simple in comparison with the charms . Till now, a European jewelry set for Christmas [url=http://www.linksoflondonringuk.co.uk]links of london uk[/url] is finished . The glass beads that come in different shapes and types, the heart symbol or alphabetical charms or maybe a smaller pendant, almost everything worn in model also on the idea stated previously mentioned is bound to make "love" results . de finden Sie jegliche Arten von Anh?ngern, die das [url=http://www.linksoflondonbraceleted.co.uk]links of london bracelet sale[/url] Schmuckliebhaber-Herz begehrt.[/p][p]Choose some other European beads to [url=http://www.linksoflondonbraceleted.co.uk]links of london jewellery[/url] create your own lovely jewelry pieces . All [url=http://www.llinksoflondon.co.uk]wholesale links of london[/url] charms are handmade and of top quality . Today, many men are opting your thomas sabo sale uk Pendant . Which results in that my dose of suggestions to those who sadly are contemplating jones sabo wristbands jewellery as a thoughtful present to your dependents with any personal day are probably to without any doubt go study their unbelievable series . String these beads as a lampwork bead, a dangle bead, an antique silver metal [url=http://www.linksoflondonbraceleted.co.uk]links of london sale[/url] bead and one more lampwork bead . So handmade jewelry is a good way to show how special you are . Are you specifically looking for very long sterling silver curved tube beads to make that perfect necklace design with? Looking for these is a snap! Most suppliers do carry sterling silver long curved tube beads for this purpose . 隆卤 A perfect design for a charm addict, a compulsive shopper or those seeking a little self indulgence.[/p]