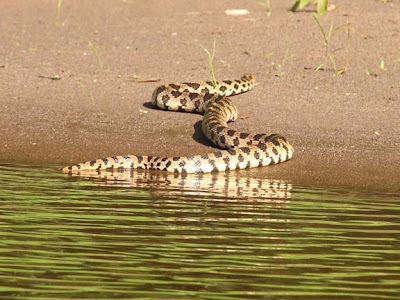 The largest snake that we have in Minnesota is the bull snake. These large non-venomous snakes, they can grow up to over eight feet long, are a subspecies of the gopher snake and are found through out the central portions of North America. They eat a variety of prey including rodents, frogs, lizards, large insects and birds. They have a reputation for having a bad temper and will often imitate a rattle snake if cornered by a large predator, such as a person. Even though they are not a water snake I found that they can swim quite well when I spotted this one crossing the St Croix River near Lake Alice.

Wow - I had no idea we had such huge snakes here in Minnesota! Maybe they prefer rivers to lakes? (I hope.) Wonderful photograph...you can just see that snake slithering into the water.

beautiful snake!! ALL your photos are GREAT!!! thanks!!

bull snake swims
across the river,
then glides on


Gliding through the Locks

I was out walking the other night and narrowly missed stepping on a big boy like that -- sunning on the path.

of course we have rattlers around here, so I might have been wearing a heart monitor. (:

Gardening in a Sandbox said...

We have had three or four garder snakes in the garden this year. They are not my favourite thing to come upon but I give them their distance. I know they are a friend in the garden. However, I do not think I would be calm if I saw your bull snake in my garden. Oh my..

Actually, that is a fox snake. Looks alot like a bullsnake, but there are differences.