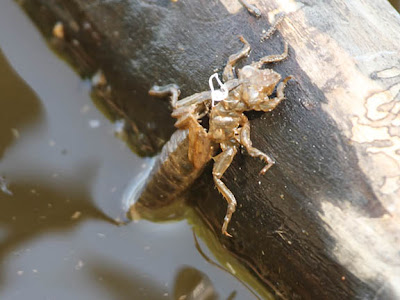 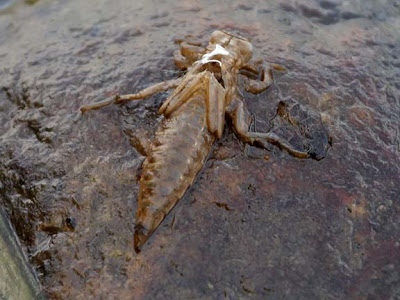 Dragonflies typically live from one to three years in their larval form, although some species live longer and others less. The nymphs hatch from the eggs which are deposited into the water by the female. The nymphs are carnivorous eating aquatic insects, other nymphs, tadpole and small fish. They frequently molt as their size increases. When they are ready to become adults they go into a type of rest state called diapause,where the final necessary changes in their form are made. When the diapause is complete the nymph will crawl out of the water, typically onto to a rock or hanging vertically from vegetation on the shoreline. Then a split occurs in the skin at the back of the head. The split continues down the back making enough room for the new dragonfly to emerge. The picture above are the skin husk that remains after the dragonfly emerges. These appear to be the husk of emergent clubtails which were photographed on the shore of the St Croix River.

That's great information. We have lots of damsel flies at our cabin. They are a lovely blue and will even land on an outstretched foot while I am floating in our lake "swimming pool." I will be on the lookout for nymphs and their husks. - Margy

Very interesting...I had known this from posting a did last year, however, my grandson and daughter found a creature early last month and Thomas placed it in jar for a little while and then released it. It is in a post from back then as well I do believe. I am now thinking that it had been a dragonfly in this stage. Not only are your images great, I think I just learned what the mystery guest was~

Superb observation and very nice shots of it!

Thanks for sharing the scoop on dragonflies.

Great shots. I'm going to use this information to make other people think I'm really smart. :-)

Thanks for the info - you are right, many people (including me) do not know this stuff - so like Vicki above, I shall now impress many with my new nugget of info!!

Thanks for posting this information. I stumbled across your post and I'm so glad I did! The other day my son asked me to come outside and check out this insect hanging vertically on our screen. I had no clue as to what it was. We just left it alone...wondering what it was. Now I know that it was a dragonfly in one of its stages. So cool to know this now. :)