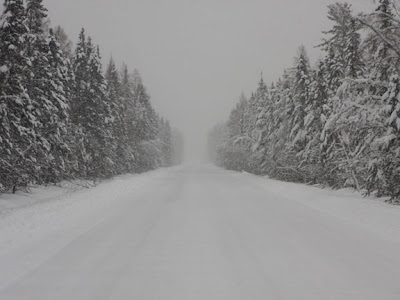 Last weekend I headed up north for the first annual Brrrrdathon. This event was sponsored by the newly created organization The Friends of Sax Zim, formerly Bird Nation, to raise money for an eventual visitors center in the Sax Zim Bog. Like any outdoor event held in Minnesota in January weather played a major role. Shortly after I arrived in Duluth on Friday the snow began to fall, which made photographing wildlife, not to mention driving, very difficult. 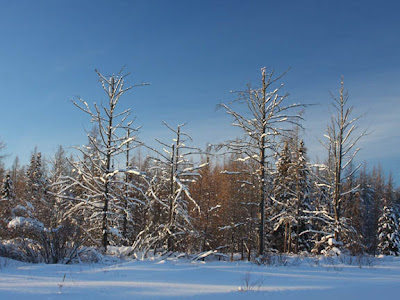 As I sat in my hotel room Friday night I was worried that the trip would be a waste of time due to the weather but when I woke up Saturday morning the skies where clear and blue. After digging my car out of the snow I headed out slowly to the bog. The city plows were already out working but the road conditions were still not very good, especially when I got to the back roads in the bog. 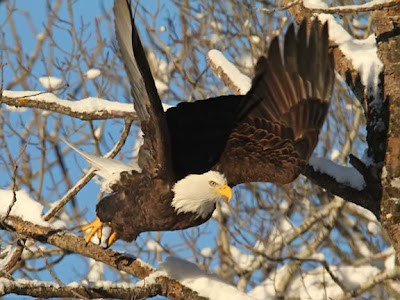 Despite my concern over the roads I was excited about the number of birds that I spotted as I travelled to the bog. The end of the storm seemed to bring the birds to life and many of them fluttered from tree to tree looking for food. As I entered the bog area a bald eagle soared from his perch to greet me. 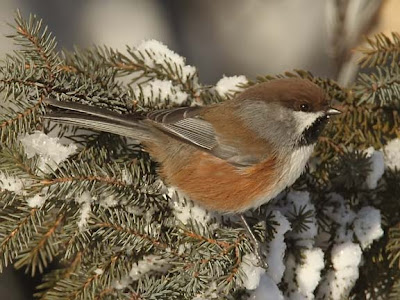 The first place in the bog that I headed to was a feeding station that had been set up on Admiral Ave. Admiral had not been plowed at all but I was able to make it through travelling down the tracks of others who had already made their way down the road. A feeding station has been set up in this location for years and it has always been good for attracting northern species including boreal chickadees. When I arrived at the feeder there was already a pair of boreal chickadees there as well as black-capped chickadees, pine grosbeaks, red-breasted nuthatch, and downy and hairy woodpeckers. 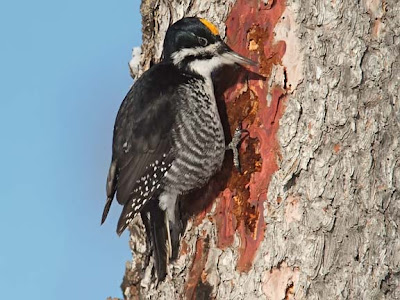 After shooting at the Admiral feeder for about an hour I headed over to McDavitt RD, which is another location that many of the northern species have been seen. About half way down McDavitt I found a path in the snow that went back to a small feeding station that was located in the woods. I decided that I could use a little exercise so I through on my winter gear and headed out down the path. It did not take long before I located a pair of black-backed woodpeckers. I was excited because black-back and three-toed woodpecker sightings have not been as common this year as they have in the past. Unfortunately to get the angle I needed to get decent shots of the bird I did have to wade through waist deep snow. It was worth it though, don't you think? 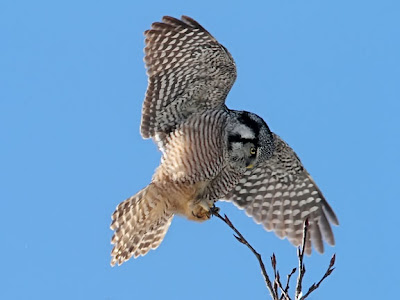 The main attraction at Sax Zim are the northern owls. The Sax Zim Bog is a mix of state, county and private lands, which includes the Cloquet Valley State Forest, Whiteface River State Forest and the Sax and Zim Wildlife Management Areas. The habitat consists mainly of conifer bog, spruce, tamarack and white cedar. This particular habitat is very attractive to northern owls that come down from Canada in the winter in search of food. The most common type of owl seen during the winter is the northern hawk owl. I found this northern hawk owl perched in a tree not far off of Mcdavitt. Since northern hawk owls are mostly diurnal, active during the day, they are one of the easiest owl to photograph. 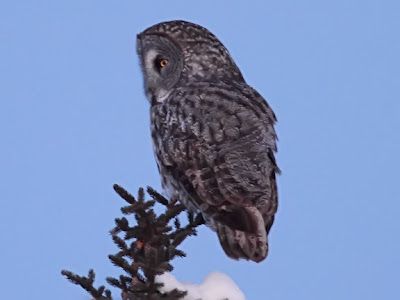 As the sun went down on Saturday night many birders began their search for the most prized bird in the bog, the great grey owl. Great grey owls have not been seen with any regularity in the bog since 2005, when there was an irruption of thousands of birds which came down from Canada. This season there have been more sightings then in the past few years but it still seems to be hit and miss. The fact that they are crepuscular, hunt at dusk and dawn, also does not help, especially if you are looking for pictures. Fortunately around 4:30pm I found some people who had spotted a pair of these owls on McDavitt Road. I got a few pictures in the low light and then just watched them hunt until the sun went down.

These pictures are beautiful. Especially of the great gray owl. I don't think we get them in Florida. I really have to stop complaining that 50 degrees is too cold to go out.

I love your shots! I'm always in awe at shots of wildlife, espeically those that can fly! I love the owl shots and maybe someday I can capture a nice bird photo of my own!

Your captures are superb and totally breathtaking!! I never cease to be amazed by their clarity! I love the birds and being able to see them in such detail is fantastic! Thank you so much for sharing them! Have a lovely week!

Amazing shots of birds...as always. I love your bird photos. I wish I was a good bird photographer- I live in a nature reserve and in winter "my" valley is the best place in Europe to see birds of prey, particularly eagles. Although I have the right equipment, I never manage to take a good picture. I blame my dog..."smile". Thanks for sharing!

My entry is here

Wow, sometimes fighting the elements is worth it. You took some great shots! 'hugs from afar'

Wow, awesome birding day and photos. I love the boreal chickadee and the owls are cool.

I love these photos, and I love the name Brrrdathon.
Good work, glad you handled the roads and got your Great Grey Owl.
-- K

great report and story !! I am going to the festival in a few weeks from down in Illinois and looking at these pics really gets me psyched. I hope I get the opportunity to see all these birds
Mark mjb1858@gmail.com

Two of my great loves in your post,that remarkably coloured chickadee and of course the magnificent owl.
Great shots.

You Minnesotans are tough! I've heard of the wonders of Sax Zim and perhaps some day I'll be brave enough to risk it in the winter. Your photos make the thought much more tempting - oh, those owls! and boreal chickadees, and new (to me) and wonderful woodpeckers ...

I keep coming back to this post of yours - it's truly phenomenal.