A Monument to Scaffolding 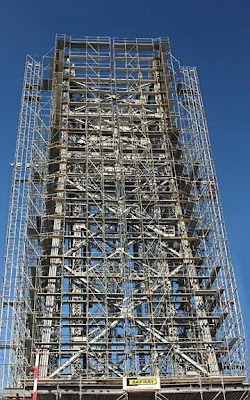 While I was up in Duluth last weekend I stopped to take some pictures at Canal Park, see my earlier post. The lift bridge, that spans the canal, is currently under maintenance and I decided to take a picture of the impressive scaffolding. 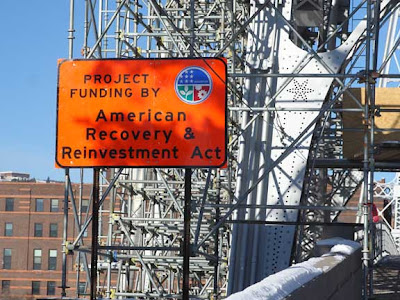 Maintenance on the bridge is being paid for under the American Recovery & Reinvestment Act, which was more commonly called TARP. The American Recovery & Reinvestment Act was very much maligned by many Republican politicians, here in Minnesota the big culprit was bat crazy congress critter Michelle Bachmann, however I have seen many of these signs in construction areas around highways and bridges. 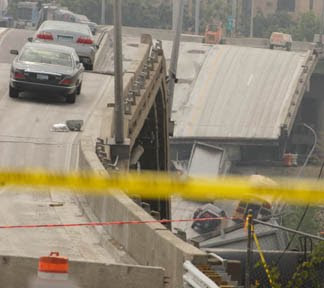 It is too bad that some politicians would rather play political games then provide people with jobs and safe roads and bridges. Safe bridges are kind of a big deal here in Minnesota, except with Michelle Bachmann who probably considers bridges as socialism, especially since one of the main bridges between St Paul and Minneapolis fell back in 2007.

Ah, please know just how much I agree with you -- but I can't get started on my latest political rants or I won't have the time or energy left to comment on the magnificent skies we enjoy -- in spite of $#@*& politicians like M. Bachmann! Have a great weekend!

Thanks for adding your views and photo to the Sky Watch Friday party and have a good weekend.

Very interesting photos for SWF!Thank you for sharing and have a great weekend!

That is quite the scaffold, beautiful blue sky!

I hear you on that! Great pics.

I am sorry if this is a duplicate. I don't know where my other message went. I love your blog and photos and your message! thank you!
Cecile

Very impressive scaffolding! And who needs infrastructure? Not us, we're America and all we need to do is feel good about ourselves! (Note the sarcasm.)

Love the intricacy of that first shot.