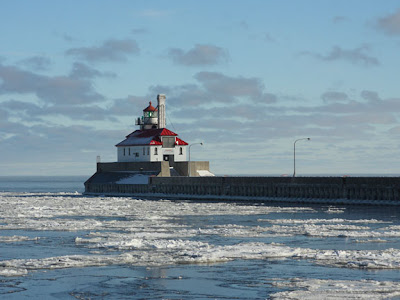 I spent most of my weekend up north participating in the first ever Brrrrdathon. I took a lot of pictures of birds, which I will be sharing with you at some time over the next couple of weeks, but I also took time out to visit Canal Park in Duluth, MN. 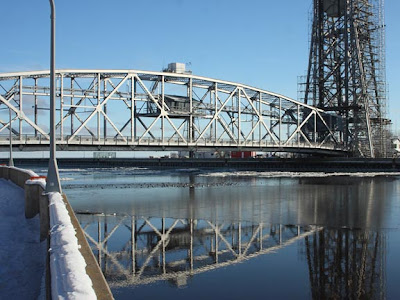 Canal Park is a little tourist area around the canal that leads into the Saint Louis Bay and Duluth Harbor from Lake Superior. There are a lot of shops and restaurants around Canal Park but the center piece is the Aerial lift bridge that crosses the canal. On one side of the bridge is the city of Duluth on the other side is Minnesota Point, or Park Point, which is a seven mile sand bar that separates Lake Superior from Superior Bay. 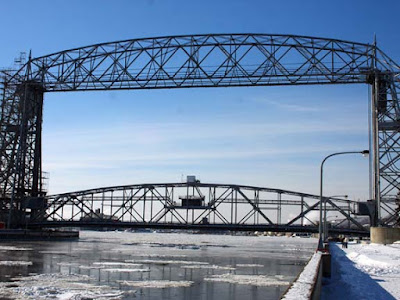 The canal at Canal Park was built back in 1870 to allow ships a quicker access to the Duluth Harbor. As more people began to settle on Minnesota point traversing the canal became an issue. So in 1905 the city completed the bridge over the canal. The first bridge was a transporter bridge, on of only a few ever built, and had a gondola which was raised and transported across the top span. 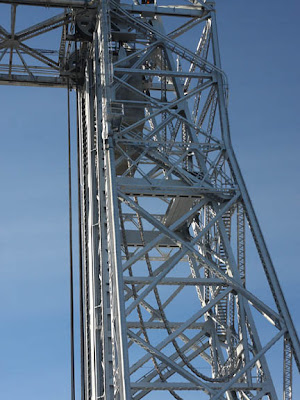 By the 1920s the bridge could no longer handle the amount of traffic that was crossing the canal. So in 1929 they began work on remodeling the bridge. The new bridge would have the center span raised to accommodate ships traversing the canal. The work included raising the top span and adding a pulley and counter weight system to lift the center span. You can see the pulleys and the counterweight, from one side, in the photo above. Even though it was added to the National Registry of Historic Places in 1973 the bridge is still n use today and is typically raised 25 to 30 times a day during the busy shipping season. 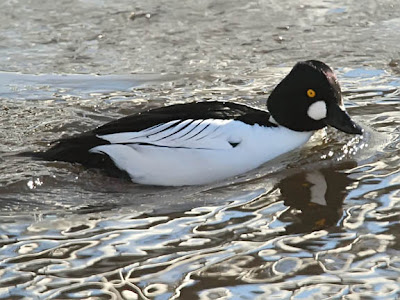 Of course wherever you have open water in Minnesota during the winter you are bound to find some wildlife. So I managed to find a large flock of common goldeneye diving in the icy water looking for fish. There must have been good fishing near the canal walls because the birds kept diving real close to the side.

Marvelous captures as always! It does look SO cold!! Love the golden eye! Beautiful! Hope you have a great week!

Having a thing about bridges love the second reflection shot. Not been around for a while, but good to see still the most wonderful wildlifes shots and info here.

Very informative and interesting post and great shots. The bridge is very beautiful. I love bridges.

Brrrrdathon!!! Love it. Terrific photos. First bridge shot is great with the reflection, and what an interesting duck!

What lovely blues in the sky! And that goldeneye is gorgeous!

beautiful winter photos, like thes from the bridge and the ice in the canal

Have a nice week,
Greetings, Bram

Seen on My World Tuesday
Have a nice week,
Greetings, Bram

Man, that looks cold! Beautiful shots of the bridge. I thought all of the birds and ducks flew south for the winter. I guess you are still south of somewhere else, though.

I posted a little bit different view from Canal Park on theme day for 1/1/11. Mine was taken in July. http://twincities-photorama.blogspot.com/search/label/theme%20day

We can find out it?