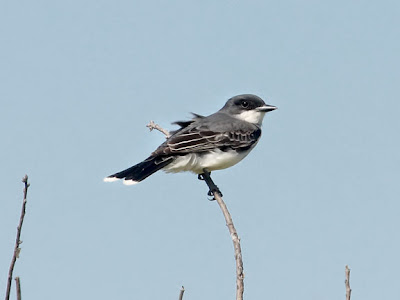 The eastern kingbird is one of the easiest birds to photograph during the summer. They re common through out most of North America except the arid south west. They spend most of their time perched in open habitat where they hunt for flying insects. 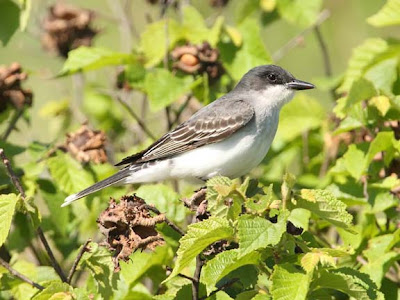 Since there are not many insects to eat around here at this time of the year, the kingbirds have migrated south for the winter all the way down into the central portion of South America. During this time they tend to congregate in flocks and eat mainly fruit and not insects. 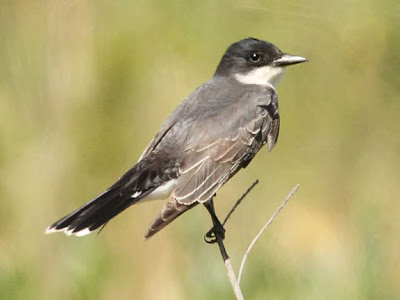 When they return they will find a territory and build a cup style nest typically in a tree or shrub. They will defend the nesting territory aggressively from other kingbirds and even harass any other large birds that come near. They are able to identify cowbird eggs and will usually remove them from the nest. They will typically only raise one brood per year, this is because they spend a long time feeding the chicks at the nest.

Posted by Ecobirder at 2:02 PM

Wonderful images! Every spring I have an E. Kingbird stop by my Cape Breton property, but he never stays. Hmmm, perhaps because there are not really any trees. But he always makes himself known to me before he continues on his journey. ~karen

Great shots of the Eastern Kingbird!

I enjoyed seeing your photos of the kingbird for Camera Critters.

Great photos of this bird. I will be looking for it this summer.

Nice shots of the kingbird. I'm learning more this morning reading posts like this!

I spotted one of these this summer and spent hours trying to figure out what it was, great photos