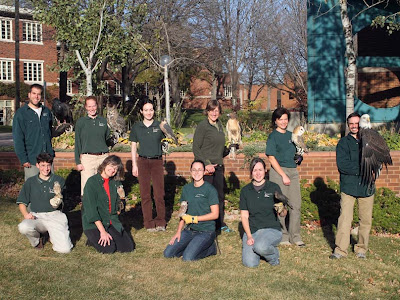 This year besides putting out my annual calendar I also volunteered to put together a calendar for The Raptor Center. They did put together a quick one back at the end of 2009 but I wanted to take some time and put together something that looked professional. For the cover we took everyone that was a bird handler that was around on a Friday afternoon, gave them a bird and had them stand together in front of the TRC building. Each of the handlers above is holding a different species of raptor. 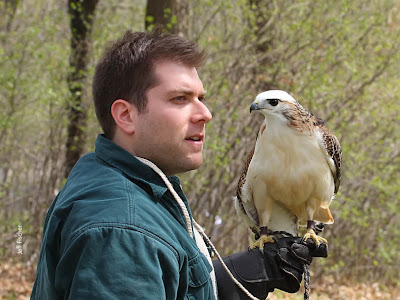 I started out the calendar by going through pics that we already had to see if there was anything that we could use. I did not want to use any stock pics that had been used many times, but since many of us take a lot of pics of the birds I wanted to see what was available. Going back in my files I found this pic, of one of the education staff, Adam, holding a red-tailed hawk named Casper, at one of our public releases. 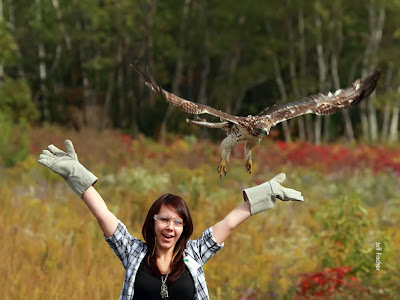 The Raptor Center has two big public releases each year. I always volunteer to help out but sneak away at release time to try and get a few pics of the releases. Of all of the release photos that I have taken over the years this shot that I got at the Fall release at Carpenter Nature Center was by far the best. As soon as I saw the picture I knew that it had to be included in the calendar. The expression on the releaser's face and the way her arms are in almost perfect symmetry to the hawks wings make this photo a perfect representation of TRC's mission to release rehabilitated raptors back into the wild. 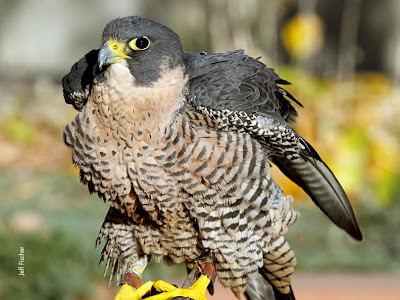 While we were waiting to take the cover shot, it is quite a trick to get that many raptors sitting calmly so close together, I took several shots of individual birds. While I was taking picture of Artemis, one of our peregrine falcons, she decided to rouse. This is an action that raptors do when they are comfortable to sort of arrange their feathers. 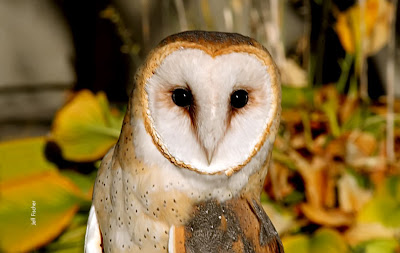 During the cover photo shoot I also got this nice shot of our barn owl, whisper. Barn owls have very keen hearing and Whisper is always quick to check out every little sound, even the ones that we can not hear. 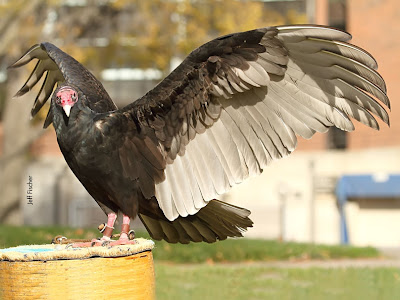 I was beginning to run out of time so I set up a photo shoot to try and get pictures of the remaining birds that I was planning to use for the calendar. Nero is the only turkey vulture in the education department at TRC. He is also one of our oldest birds, having hatched in 1974. Often when you walk by his mew on a sunny day you will see him sunning himself with his wings wide open. That was what I was looking for when we took his pic for the calendar. Unfortunately it is hard to get that six foot wingspan in a shot for an 8 1/2 x 11 format. This side shot is what I settled for. 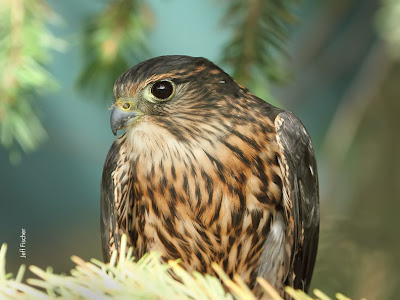 We photographed Taiga several different times looking for the right pics. I was trying to get many of the birds in what would be a natural environment for their species. Merlin falcons, like Taiga, often nest in evergreen trees so we finally decided on this shot which we took in the evergreens that are behind The Raptor Center. 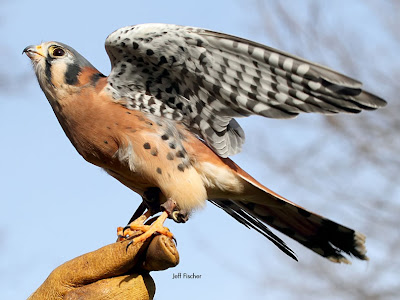 Our male kestrels, Barron and Jack, are very much free spirits. Since both are imprints, their nest blew down when they were hatchlings and the people that found them kept them too long so now they do not look at people the way that a wild kestrel would, they can fly. So I wanted to capture their spirit in the photo. This photo of Barron facing a blue sky did the trick. 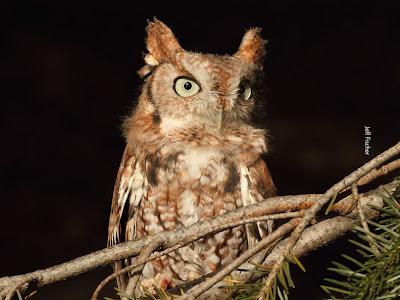 Originally I had planned on using Whisper for the month of October, since the background of her picture is very fall looking but when I saw how this photo of Mestaae, an eastern screech owl, turned out I knew that this photo had to be the one for October. We shot the pic in the same evergreens as we did Taiga but in this spot there were other trees behind which created the shade which is the back ground. 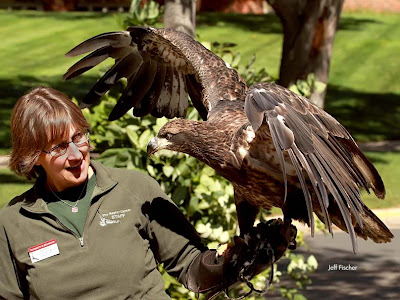 Not all of the pics that we used in the calendar were ones that I took. There was one page which was dedicated to the TRC clinic that I pulled pictures from the TRC files, and there was a great shot of one of our mature eagles, Leuc, that was taken by our education director. I really was leery about having more then one picture of any species but I really wanted to include a pic of one of our immature eagles, after all they want look like this forever. Gail was nice enough to take out Pi for a photo shoot but the picture that I decided on, above, was one I took when we stopped to talk to someone that was passing bye. Walking around with an eagle on your arm usually tends to attract attention. So when a pedestrian stopped to ask what type of bird that it was Gail took the opportunity to do some interpretation. This is a big part of what the education staff and volunteers do at TRC but our educational partners, our ed raptors, are always the real star. 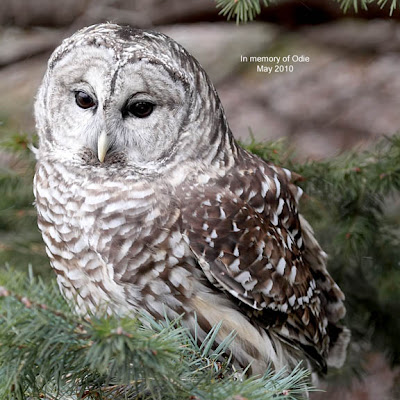 On the back cover I included this tribute to Odie the barred owl. I took the photo in December of 2009. Odie passed away about 5 months later, May of 2010. He was a very popular bird at TRC that had been at the center for over 18 years. It is important at TRC that we do not think of these birds like we would a pet but working with them on a daily or weekly basis over years you are bound to get attached, which makes it difficult when the time comes to say goodbye.
If you are interested in one of these calendars there may still be some available. You can check The Raptor Center website for more info.

Labels: My World, The Raptor Center

What an incredible world/calendar you have captured and such gorgeous birds! Really breathtaking and such a terrific thing to do for TRC! Thanks for sharing! Have a great week!

Thank you for this wonderful
tribute and tutorial of the
raptor center. that is going
to be a fantastic calendar.
Hap in New Hope

Wow! Great post. I had goose bumps as I scrolled through. Visited the Raptor Center site and saw no calendars, but I sure had fun navigating the site and checking everything out. Was quick to put in into My Favorite Places so I can visit often!! Wish I lived nearby. ~karen

What a wonderful bunch of raptors you photographed and so great that you put together the calendar with your photographs.

Great photos - it will be a fabulous calendar. Nice of you to do that for the Center!

Absolutely amazing shots. Almost unbelievable.
If I had to choose one, however, I'd choose the back cover photo of Odie. What a sweet face!
-- K

a stunning sequence of shots...

I just called the Raptor Center and ordered a 2011 calendar. I enjoy your blog very much. If I can enjoy some wonderful wildlife photos and learn something in the process I am doubly treated by your fine blog. Keep up the good work.