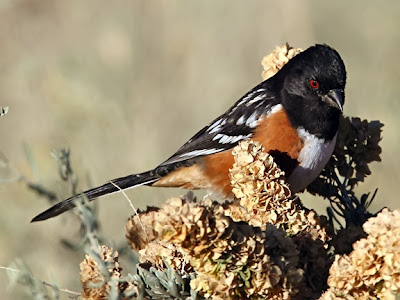 The spotted towhee is a large sparrow that is found in the western half of North America. At one time it was combined with the eastern towhee as one species called the rufous-sided towhee. Both species are very similar and do sometimes interbreed but at some time in the past they evolved separately and are now different enough to be two distinct species.

Posted by Ecobirder at 9:36 PM

I've been trying to catch a shot of a towhee for some time. They always seem to be on the ground on the other side of a chain link fence which doesn't make for good photograghy. Gorgeous!

beautiful bird...candid shot too, love it :-) Dropping by from Camera Critters

Amazing picture of this beautiful bird!

Have a great weekend :)

what a beautiful bird indeed! Dropping by from Camera Critters

What a perfect shot of this lovely towhee. Good work!
K

I've never seen this bird in the wild before. Always enjoy the photos of things we would not get a chance to see normally. Thank you so much! Your photos are fabulous.

This is a nice bird, I did not know him yet. Sparrows here are not so colorful like yours.