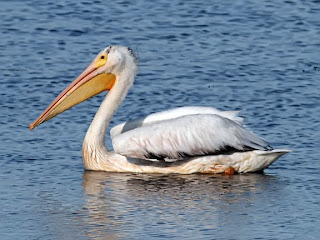 There are two different species of pelicans that can be found in North America. The brown pelican is primarily found in coastal habitats along the East, West and Gulf Coast. The American white pelican breeds on fresh water lakes in the north central plains of the continent. Here in Minnesota white pelican breed on some of the lakes in the northern and western parts of the state. Here in the south eastern part of the state, where I live, we often see them while they are migrating to their wintering grounds in Mexico, Central America and along the southern coast of the United States. 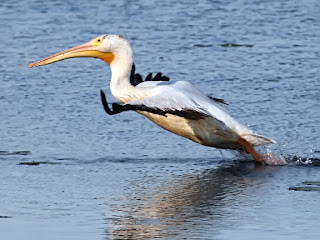 White pelicans are large birds, one of the largest found in North America. Their diet consists mainly of fish which they catch by dipping their beak into the water as they swim across the surface. The bottom portion of the beak expands allowing them to capture a large volume of water. They then sift out the water and swallow the remaining fish and aquatic invertebrates. Often groups of white pelicans will hunt cooperatively swimming in circles to round the fish up.

Very interesting post and fantastic shots of the pelicans.

I love pelicans.You see them in San Diego down by the harbor-the brown ones. I used to go camping as a college student down to San Felipe in Baja, Mexico and we camped at the beaches there. Huge flocks of brown pelicans lived there-so fascinating to watch. Thanks for bringing that memory back to me!
Although, I don't think I've ever seen the white pelican-must be quite a sight.

a PECULIAR bird, I think.

I was excited to see your choice of P word. Thank you! Just once, about three years ago, my friend Bill and I saw some pelicans by Jericho Beach (Vancouver, BC). We still talk about that magical evening, with the pelicans landing, spending a few minutes, and then flying off into a beautiful sunset. You are fortunate to see them more often.

We have white pelicans here in southern Alberta, too. I don't know why it never occurred to me that one is a saltwater bird and one a freshwater bird. Duh, huh?
I always enjoy your photos.
K

It's wonderful to see your pictures of the White pelican. A gorgeous bird that is now finding its way into the Great Lakes region.

Thank you to teaching me something I never knew about.

My first time here at your blog

Would you consider removing Word Verification? It was suggested to me a few weeks ago and my sight is still very secure without it, as I have to approve of any comments and the Spam ones are caught very well. Just wondered if you had given any thought to it, it really helps out~