They Say That Everything is Bigger in Texas 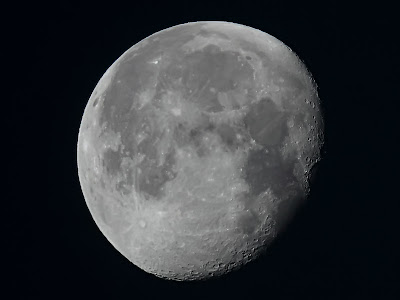 Even the moon?
It is not true. The moon is not bigger in one location then it is in another. Although the moon can appear bigger when it is viewed near the Earth's horizon. This effect is called Moon Illusion and it has been observed since ancient times. There have been many theories on the Moon Illusion but no one theory has been globally accepted. I personally think that it has to do with perception. I think that the moon on the horizon looks larger compared to the earthly objects that we see around it, such as trees building and such. When the moon is high up in the sky it is surrounded by the vastness of space and in comparison it looks small. I am sure that my theory is overly simple. This phenomenon also occurs with the Sun, and other planets. This picture was taken from South Padre Island in south Texas.

thanks for sharing, the moon sure put on a great show for everyone this week

Terrific capture! Our huge moon in Seattle was blood red when it rose at almost nine PM and it was awesome!! Have a great weekend!

Spectacular moon shot! That's what I need to work on is better moon shots.

I love seeing shots of the moon, great capture!

I like your theory. It seems plausible.
A big beautiful moon ia a lovely sight.
Best whishes
Mormor Norway

I'm happy to go with your theory! Wonderful shot.

oh my! interesting theory on the moon. got me thinking.

Aw Jeff -- I'd rather pretend that the big moon was magic ;>)....but of course I know you're right. Great picture.

I love to compare moon photos from different spots of the world. This shot is wonderful, thanks for sharing.