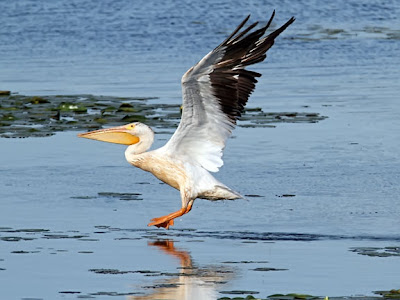 The American white pelican is a large bird that breeds on fresh water lakes across the central part of the United States and Canada. They are mostly found in the prairie pothole region of the continent. They typically winter on the east or west coast, often in salt water marshes or lagoons. Unlike the brown pelican, the only other pelican in North America, these birds catch fish by scooping up water and fish in their large throat sack while they swim. They will often work together to heard fish into large groups which they can share.

Posted by Ecobirder at 9:30 PM

Birds are SO smart...working together to get the fish is so clever.

Very nice photo - and thanks for the info!