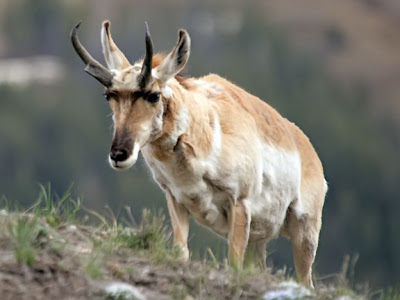 The pronghorn is the fastest land mammal in North America. They are often called antelope because of their resemblance to antelope in Africa but they are not in the same family.The pronghorn is the only surviving member of the Antilocapridae family. There were five different species in the Antilocapridae family when man came to North America but over time the four other species became extinct. 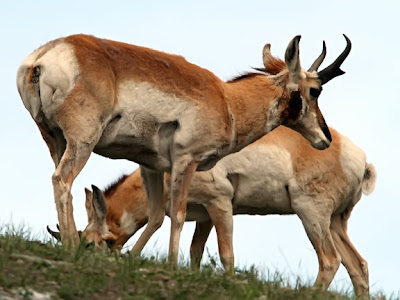 The pronghorn gets its name from the front facing point, or prong, in the middle of their horn. The horn has a core of bone that extends from the frontal bones of the skull. This bone is covered with a sheath of skin and keratinous fibers. Each year this sheath must be shed and then regrown. Pronghorn are found mainly in the grasslands in the western half of the Untied States and parts of Mexico. These were photographed in Yellowstone National Park.

I really like the first picture with the Pronghorn coming over the ridge.

Do you know what the other four species were and when they went extinct?

Beautiful animal. Thanks for the info, too!

They are beautiful. Interesting facts. Love the flowers above and the poem and photo below. Rubbish by Roan

Amazing captures of the pronghorns!!
Pardon my obsession with spelling, but I love the image of the Untied States...

They are impressing and big. Nice shots! Thanks for the information about pronghorns!

thank you with regard to sharing. i had been looking for as well. Diablo 3 Gold Buy Diablo III Gold