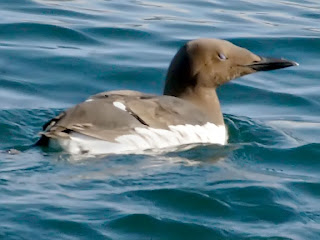 Uria aalge is the scientific name for the common murre. The common murre is a penguin type bird that is found primarily in the oceans of the northern hemisphere. They are circumpolar which means that they are often found around the coasts of North America, Europe and Asia. While they can fly they spend most of their time in the water. They are excellent swimmers and can dive to depths of about 200 feet in search of fish, squid, or other aquatic invertebrates. The only time that they usually come to dry land is during the breeding season. They breed together in large colonies on the sides of cliffs. Their eggs are quite pointed at one end, so much so that when they roll they do so in a circle. This is a great advantage when you lay your eggs on the side of a cliff. This common murre was photographed during the non-breeding season off the California coast near Monterey Bay.

Great photo and an interesting bird.

A new bird for me and utterly fascinating. Thanks for sharing!
;-)WBW!

My interest in birds has been growing over the past few years, so i am really loving your blog. Thanks for showing this fascinating murre, a new bird for me!