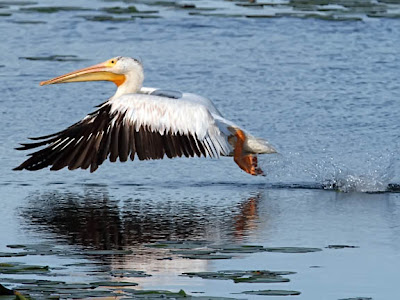 The American white pelican has the second longest wingspan of any bird in North America, only the California condor has a longer wingspan.White pelicans breed on inland lakes in the north central plains of the U.S. and Canada. They are a ground nesters, so to protect the eggs and young they nest in colonies on isolated islands in the lakes. They eat primarily fish which they scoop up in their large beak. Often times several pelicans will work cooperatively when feeding. During the winter they migrate to coastal regions in the southern U.S., Mexico and Central America.

Nice Pelican shot... That is funny, cause at the moment i read a lot about alchemia, and there is a lot of pelicans in that matter...

The wings almost seem larger than the bird's body in this photo! And a magical reflection!

Beautifully caught as he takes off and I love that soft reflection.

What an amazing capture! - Margy