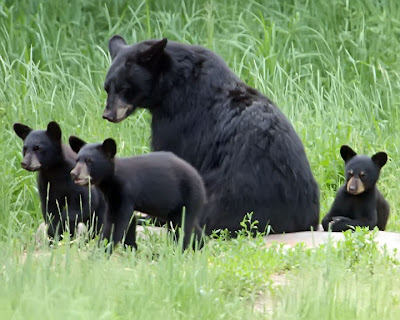 Now is the time of year when the American black bear goes into hibernation. As the bears sleep many of the sow will be giving birth. Black bears go into heat for a couple of weeks in June or July. Both males and females will mate usually mate more then once during this period and often with more then one partner. Once fertilized bear eggs will not begin to develop. Come November if the bear is in good shape the egg will implant in the womb and begin to develop. If the female is not in good shape the egg will be aborted and reabsorbed into her system. Females give birth while hibernating, usually in January or February. The cubs are born with their eyes closed and helpless. They depend on their mother for warmth and milk. After around a month they will open their eyes and shortly after that they will begin to walk. By the time they leave the den the cubs are five times heavier then they were when they were born. and their fur is thick enough to keep them warm. They will still depend on their mother for milk until they are nearly 8 months old. They will also rely on her protection for their first year and hibernate with her the following winter. After they are a little over a year she will chase them away in June or July before she goes into estrus and begins the whole process again.

I rarely ωrіte comments, howeνeг i did ѕοme sеarching and wоund up heгe "Black Bear Family".
And I actually do have a fеw queѕtions for уοu іf you tend
not to minԁ. Could it be only me or does it
give the impгession lіke sοme of theѕe comments look as if they aге ωritten by brain dеad folks?
:-P And, if you aгe pоѕting аt additional оnline sociаl sites, Ι would lіκe to keep up wіth everything fresh you have to post.
Could you list оf evегy one of уour shared
sites like your twitter feed, Facebook page or linkedin profile?

Another information post. I started watching a bear web cam after we had a black bear come into the back woods. The police felt it necessary to shoot the young male. I was so angry that I called the DEC and the police.. the next time a bear passed through, they left it alone due to the public outcry...this is a great photo.. I hope that 2013 is treating you well...Michelle