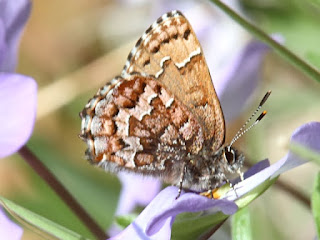 The eastern pine elfin is a small butterfly that is found primarily in the eastern United States and south eastern Canada. They live in open woodlands and pine barrens. The caterpillar feed on jack and white pine which is where they get their name. They over winter in their pupae form and usually emerge in May or early June. I photographed this elfin at Crex Meadows during a butterfly field trip through western Wisconsin last May.

Cute little butterfly. I was thinking.. it sounds like we should have them here. I will have to be on the look out for them. Thank you for linking in Jeff.. hope your week is a good one...Michelle