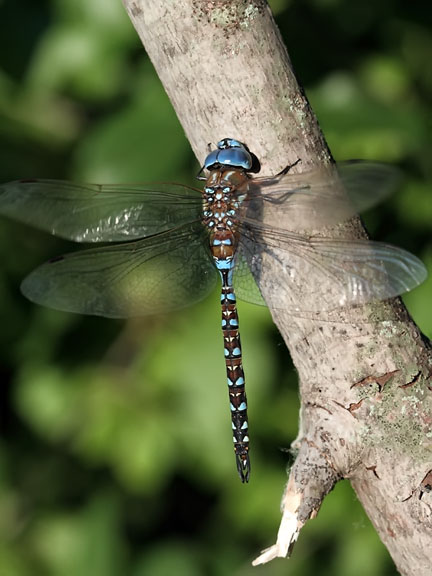 The blue-eyed darner is a large darner dragonfly that is typically found in western portions of North America,  Central America, and northern South America. In North America it ranges west from the Dakotas and north up in to central Canada. It appears as though this species may be extending its range east as we have found specimens of this species here in Minnesota over the past few years. It also may be the case that this species has been here in Minnesota for awhile but since the state has been so poorly surveyed until the past few years it may have been missed. It is easy to identify the species by its bright blue eyes. It also emerges much earlier then most darners. Here in Minnesota the only other darner species that we see as early in the year as the blue-eyed is the springtime darner. The springtime is much smaller so chances are if we see a big darner early in the year it is probably a blue-eyed darner.

what a cool picture! I love when the dragonflies arrive in the Adirondacks in the summer.

Please join us at Wordless Wednesday Bloggers at www.wordlesswednesdaybloggers.blogspot.com! And be sure to sign up on our site to get an email notice when the next WWB is live.

In the truth of [url=http://www.longchampbagoutlet.info]longchamp bags[/url] femmes, there tend to be several voyagers who only visualize one checkpoint, but the truth is that you can use three. The first checkpoint is when you go to register for your personal seat about the plane. This could be the timewhen you're presented with your boarding passes and for people with to pay the tote [url=http://www.saclongchampachete.info/category/longchamp-le-pliage]longchamp pliage noir[/url] that you want to checked.
You'll might also want to walk via the metal detector. In prior times, only random travelers had been asked to take out their footwear for taking a look at. Your shoes will likely be x-rayed, along using the rest within your carry on [url=http://www.saclongchampachete.com/category/sac-longchamp-pliage]sac longchamps 2012[/url] bags.

Even however the individual policies of every airline may perhaps vary a bit more, in common, any remain bags must not be in overabundance 45 linear inches wide marc by marc jacobs [url=http://shopuggboots.webnode.jp]アグ[/url] outlet online. To know very well what a linear inch happens to be, simply accumulate the size, width and the size of your maintain [url=http://bagsmarcbymarcjacobs.webnode.jp/ニュース/]マークジェイコブスバッグ[/url]. 40 pounds is what the standard weight limit really is.
as a famous company in bag, hermes is known as a queen. here for more: [url=http://hermesjapan.webnode.jp/ニュース/]エルメス[/url] 2013

Please join us each Friday for Photog Friday at www.photogfriday.blogspot.com
for those who enjoy and want to share beautiful photography. Share your photos from the week and connect with other photogs.

And be sure to sign up on our site to get an email notice when the next Photog Friday is live.

You think there is nothing really to discover and I was surprised that so little had been surveyed here and I guess in many places. I love to look for them and grab a photo. Great detail and info...Michelle