Maplewood Nature Center become one of my favorite spots later on during this summer. It was an easy drive after work and not far out of my way home. Also there was usually not many people around which meant that I was usually able to shoot in peace. Although I am usually a pretty outgoing person I really like to be alone when I am out in nature. The peace and serenity that I feel when I am alone in the woods is kind of spiritual for me. 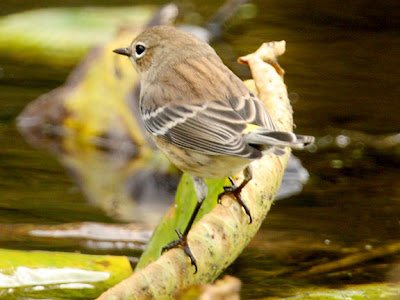 Near the end of September, 9-29, I made a quick stop at Maplewood. I did not have much time, as the skies were clouding up and were threatening to rain on me, but near the boardwalk that crosses the lake I found a small group of yellow-rumped warblers skittering from lily pad to lily pad searching for bugs to eat. 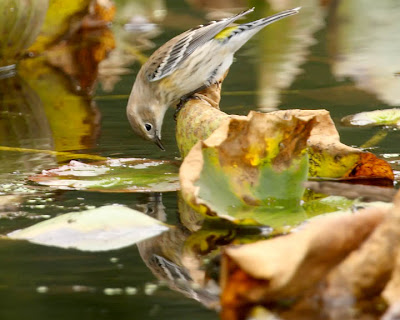 Yellow-rumped warblers are one of the most common warblers that we see here in Minnesota during the migration period. They are able to digest bayberries and wax myrtles, which other warblers can not. This provides them with an additional food source that other warblers do not have which enables them to winter further north. 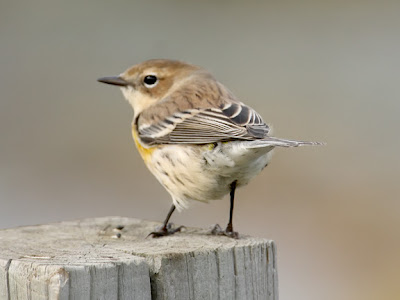 Some yellow-rumped warblers winter as close as northern Illinois and Indiana. Because of this they are usually one of the first warblers to migrate through in the spring and last to migrate back through in the fall.
Posted by Ecobirder at 7:47 PM

Enjoyed your lovely warbler photos. I also enjoy dragonflies though I've only photographed a few. I once had the surprising experience of watching a female blue dasher deposit her eggs in a pond and as she did, the male watched over her from a near by twig. I had no idea the male stayed near by for this event!