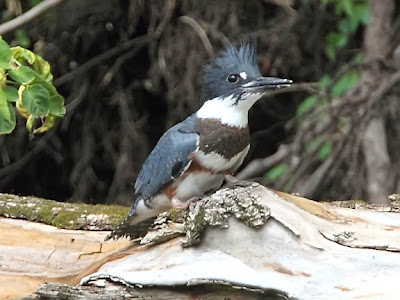 So what do belted kingfishers have in common with bank swallows and burrowing owls?  The belted kingfisher, like the other two for-mentioned species, nests underground. They dig a burrow in the bank of a river or creek. At first they use their strong beak to chip away at the dirt and mud of the bank. Once they have a burrow started they will flying into it and kick out the loose soil with their feet. The tunnel is usually from 3 to 8 feet long and slopes up so that the burrow is less likely to get flooded. Human activity, such as road construction and gravel pits, has actually helped to increase the amount of available nesting habitat for these birds.

Posted by Ecobirder at 6:56 PM

I've never seen a kingfisher, but your photo gives me that chance! I do, however, know lots of kingfisher poems. Here's one for you and your photo:

That kingfisher jewelling upstream
seems to leave a streak of itself
in the bright air. The trees
are all the better for its passing.

It's not a mineral eater, though it looks it.
It doesn't nip nicks out of the edges
of rainbows. - It dives
into the burly water, then, perched
on a Japanese bough, gulps
into its own incandescence
a wisp of minnow, a warrior stickleback.
- Or it vanishes into its burrow, resplendent
Samurai, returning home
to his stinking slum.

gorgeous bird shot....and thanx for teaching me something new...always appreciated....

Wonderful shot! Such an interesting bird.

here is one of the good Online Food Deals site in india: Online Deals in Delhi at Khaugalideals.com

Hey there, I think your site might be having browser compatibility issues.

When I look at your blog site in Opera, it looks fine but when opening in Internet Explorer, it
has some overlapping. I just wanted to give you a quick heads up!
Other then that, great blog!

Hey I know this is off topic but I was wondering if you
knew of any widgets I could add to my blog that automatically tweet my newest twitter updates.
I've been looking for a plug-in like this for quite some time and was hoping maybe you would have some experience with something like this. Please let me know if you run into anything. I truly enjoy reading your blog and I look forward to your new updates.

Feel free to surf to my web-site - stump

Do you have a spam problem on this blog; I also am a blogger,
and I was wondering your situation; many of us have developed
some nice procedures and we are looking to swap strategies with others, be sure to shoot me
an email if interested.