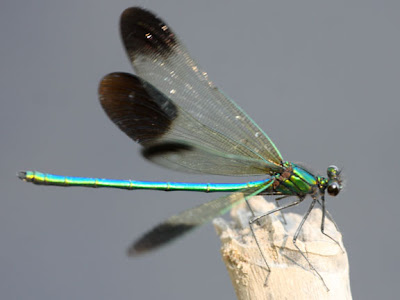 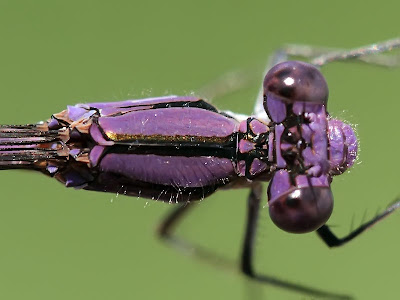 There are some other differences that can help identify between zygoptera (damselflies) and anisoptera (dragonfly) but many of these other field marks have exceptions. Damselflies all have eyes that are widely separated while most dragonflies, with the exception of the clubtail family, all have eyes that meet in the middle. Dragonflies are typically larger then damselflies, however the longest odonata in the world is the helicopter damselfly of South America. Dragonflies usually perch holding their wings out flat at their sides where damselflies perch with their wings folded together over their back with the exception of the spreadwing damselflies that hold their wings out at a 45 % angle at their side.

I( was wondering what the difference between the two was. Thanks for the info. Nice photos.

No wonder that these disgusting insects have such complicated names, lol !
Gattina
ABC team

I have been calling them all dragonflies (and loving them) but will now try to distinguish between damsel and dragon. Remembering the latin terms may take a while but I live in hope :) Thank you!

You MUST be a scientist! Well, if you aren't, you'd pass as one! What beautiful damselflies those are, my dear!

I was on my way to the Great Horned Owl, and what a great capture and then saw these
en route, awesome macros~

great shot..we never realize just how beautiful they are.

That second shot is awesome, loving that purple!