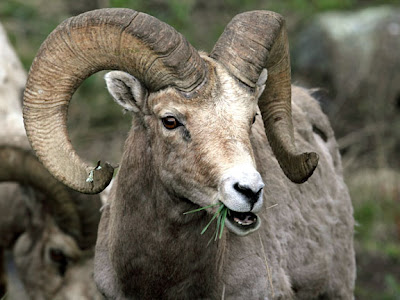 It is believed that the sheep of North America originated in Asia and crossed the Bering Straight approximately 750,000 years ago. After about 150,000 years these Snow Sheep from Siberia evolved into two separate North American species, Dall sheep in Alaska and western Canada and big horned sheep in the western half of the United States. The big horned sheep is further divided into three subspecies, the desert bighorn which is found in Mexico and the southwestern United States, the Sierra Nevada which are found in the Sierra Nevada Mountains, and the Rocky Mountain bighorn which is found in the Rockies. This ram is a Rocky Mountain big horn and was photographed at Yellowstone National Park.

That is a beautiful sheep, I haven't seen those big horns! And thanks for the information.

He's a gorgeous animal, thanks for the info. Loved your photo!

Always love learning something I didn't know about before...(and there is so much I don't know!) The horns on this sheep are unbelievable .....