Tiger of the Sky 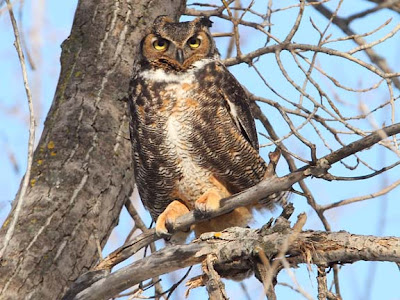 Here in North America the great horned owl is often referred to as the tiger of the sky. That is because they are a ferocious hunter know for taking larger prey. Often their prey is as large or larger then that of the bald eagle, even though the average eagle here in Minnesota can weigh 2 to 3 times more then the owl. Frequently their prey is larger then the owl, as is the case with the striped skunk which weigh an average of 2 or more times what the owl weighs. In comparison that would be like and average human attacking a female grizzly bear.

A huge and beautiful bird.

Great shot! Love those birds.
I captured some dusk shots of one in our backyard a few years back.
http://ourfunwithfive.blogspot.com/2009/01/flying-tiger.html
Would love to have a daylight opportunity now that I've got better camera equipment.
I enjoy following your posts!

They are such beautiful raptors!

That is a cracking Owl. Great shot.

Great photo of the owl.

Beautiful owl and beautiful shot. And hey, I like tigers too, so I'm happy!