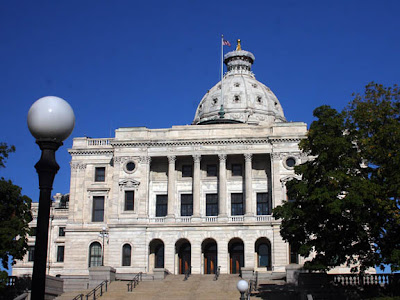 Minnesota is the 32nd state of the United States and was admitted into the US in 1858. The capital of Minnesota is St Paul. The capital building in St Paul was built between 1896 and 1905. It has the second largest unsupported marble dome in the world. The building was modeled after St Peter's Basilica in Rome, which has the largest unsupported dome. This is the third capital building for Minnesota. The first was destroyed and the second was too small.

Posted by Ecobirder at 9:03 AM

The capitol building is so elegant and majestic with that lovely dome on top. And what a gorgeous deep blue sky above it!

The whole idea of an unsupported dome is pretty amazing! What a great shot against that beautiful blue sky!