Snow buntings and horned grebes at Minnesota Point in Duluth

After a week of days filled with either rain or gray skies or both, the weather reports said that we would have a clear and sunny Saturday on October 20th. I wanted to make another trip up to Duluth, MN before winter came so I decided that I would drive up that Saturday morning. I left at around 7am, the sun was just starting to light up the sky, and I arrived in Duluth around 9:30am. The drive was very nice. The weather was perfect, with deep blue skies and crisp fall air, and the scenery was a tapestry of fall colors.

Unfortunately as I approached Duluth I could see clouds moving in from the west and as I crossed the bridge onto Park Point a wall of clouds blocked out the sun. Since I had already made the trip, and there was not much that I could do about mother nature, I continued with my plans. I drove out park point spotting mallards, Canadian geese, several different types of sparrows, dark-eyed juncos, and several types of gulls as I drove. When I reached the end of the road I parked by the airport and hiked up to the beach of Minnesota Point. When I approached the lake I spotted 2 birds in the water near the shore. As I moved in to get some pics the birds dove under the water and swam out into the lake. I could see them well enough to identify them as horned grebes but they were not too far to get any descent pics. So I moved on to the east following the Lake. A ways down the shore I spotted a couple of snow bunting. 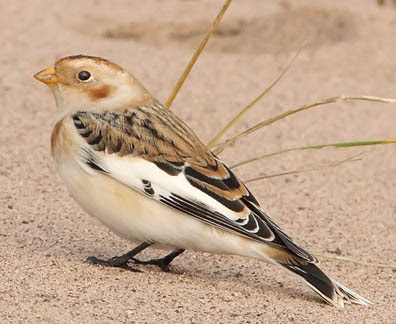 I almost did not see them, their winter, non-breeding, plumage blended so well into the sand. 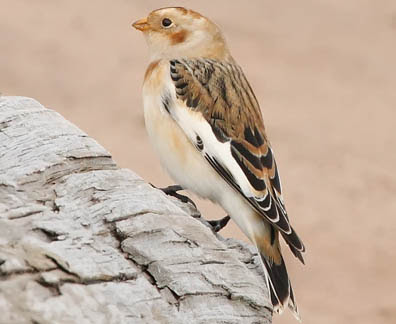 When I got close though they flew a little ways down the beach so I followed and got some shots. I did not see much more except quite a few people and dogs so I started back to the car. On the way back I saw that the grebes where back in close to shore again. This time I took a different approach to try and get some better grebe pics. When the birds were up I would stay still and when they dove under the water, after some breakfast, I moved closer to their location. 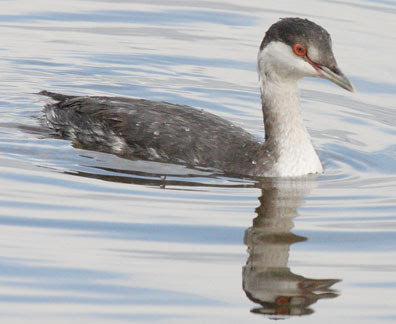 This strategy worked well. I was able to get pretty close to the wary birds. 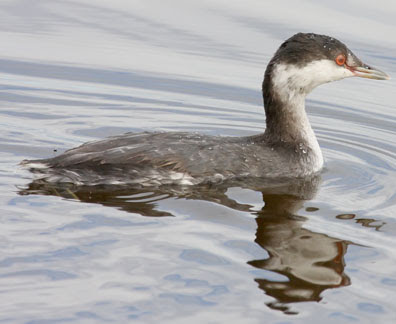 Once I got close I continued to follow them using this strategy. Every time they would go under I would move to where I thought that they would surface. Several times one of the birds would come up within a few feet from where I was standing. 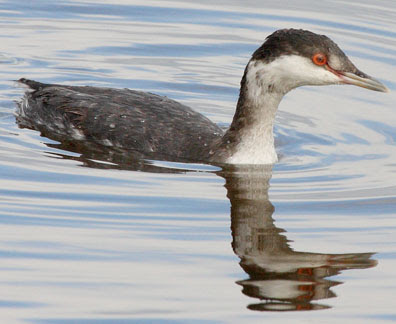 You know when you get detail in the eyes that you have gotten some good shots. It is just too bad that they are not in breeding plumage because they look much cooler when they are in breeding plumage. After a hiker with a dog kind of spooked them back out into the deeper water I decided to leave and make my way up to Hawk Ridge.
Posted by Ecobirder at 6:02 PM