Out to lunch with a peregrine falcon

A couple of weeks ago while I was working my shift at the Raptor Center, I am a Wednesday afternoon volunteer, a woman came into the center. Several of our crew were up front, at the time, so we greeted her and asked her if she would like to know more about raptors. Part of our responsibility as an education volunteer is to answer peoples questions about raptors. I have gotten asked some real good questions in the short time I have been helping out at the Raptor Center but this was the first time that anyone had ever asked me, " Did you guys know that there is a peregrine falcon flying around outside?" Well needless to say we were all pretty excited and we followed her outside so that she could point out the bird. She pointed out the corner of a tall campus building a couple of blocks down. I could see a dark object on the corner but it was too far away for me to see anything more then a spec. So I went back into the Raptor Center and grabbed my camera. 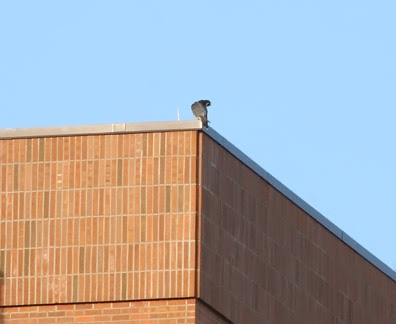 Even with the camera the bird was still too far away to get any good pics, so I decided to walk down the block so see if I could get a closer shot. While I was walking though I saw a dark shape dart down the road. I did not get a good look because of the small trees lining the sidewalk but I was pretty sure that the peregrine had left her perch. When I cleared the trees I could see that the bird was no longer on the corner of the building where it had been so I continued down the street in the direction that I had seen the bird fly. I continued down another block or so, checking the tall buildings to see if it had found a new perch. After I did not see the bird I decided to head back to the Raptor Center. I thought that I would take the back way, on the way back, just in case and as I rounded a building I found the peregrine on the ground in front of me just beginning to dig into its catch. 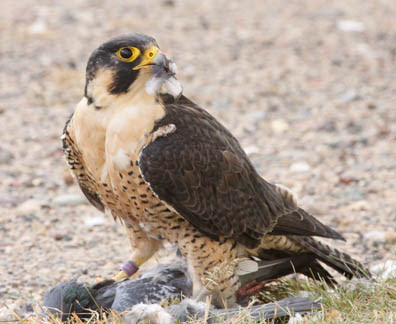 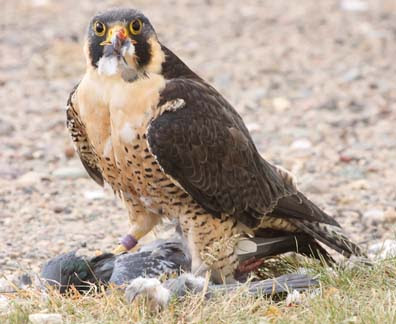 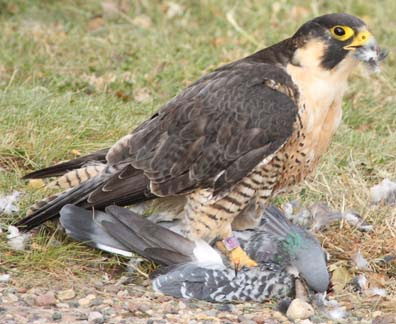 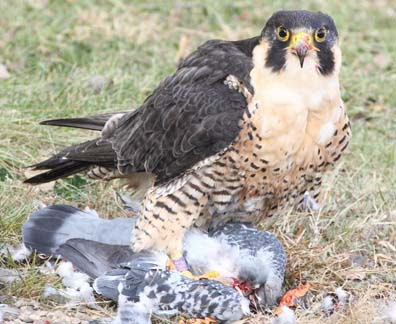 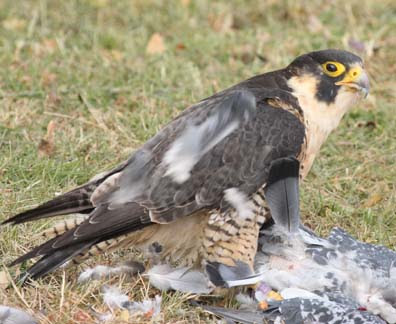 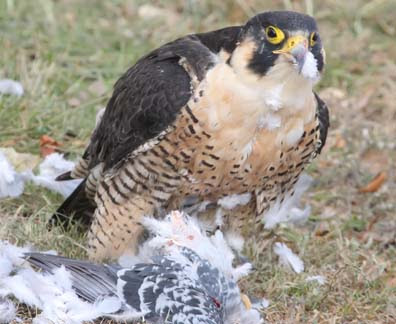 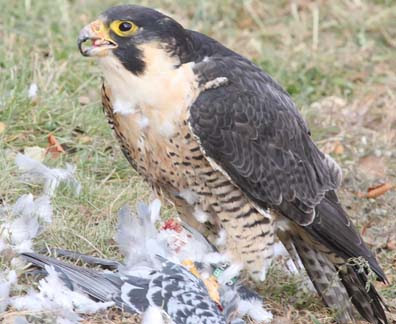 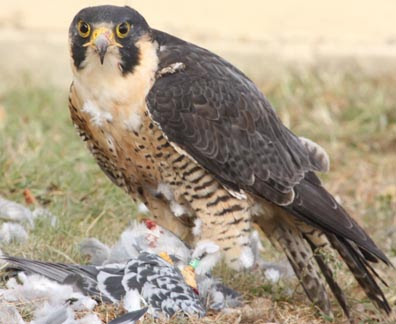 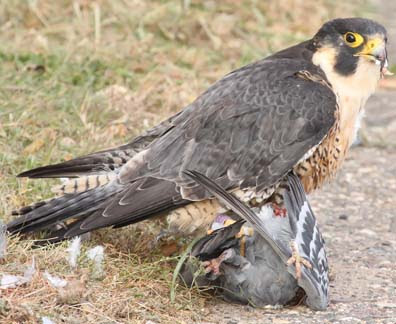 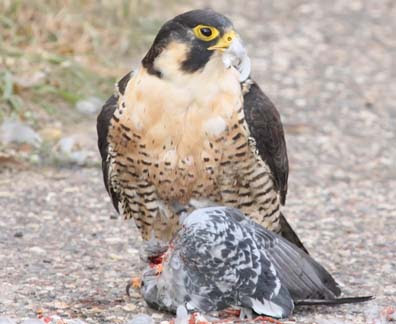 I sat and photographed the bird for quite a while until I ran out of space on my 8GB card. I changed my angle several times to try and get some shots from different perspectives. I moved very slowly and kept enough distance so that I would not spook the bird. I even had to manage traffic and a few pedestrians since it was on the edge of a parking area behind one of the university buildings.

This bird was banded with a purple band on one leg and a green and black tag on the other. The purple tag is a US Fish and Wildlife banding tag. The fact that it was purple indicates that this falcon was born in the wild. The other tag is one that is used to help ID peregrines from a distance through a scope or binos. The green and black color indicates that it was banded in the Midwest. From the pictures I was able to read the numbers on the black over green tag so that, with help from the Midwest Peregrine Falcon Restoration Project database, I could ID the bird. 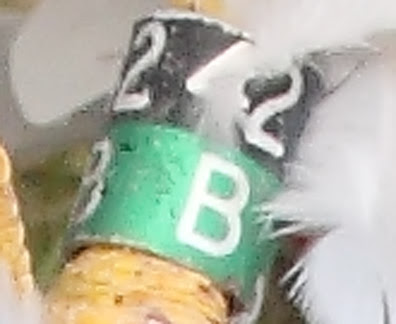 The tag number is 42B. This bird is named Marcia and she was hatched at the Monticello Power Plant in 2002. With some help from Kelly Scott, my shift leader at the Raptor Center, and Jackie Fallon, who works for the Minnesota Zoo, is a volunteer at the Raptor Center and is the current coordinator of the Midwest Peregrine Falcon Restoration Project, I also learned that Marcia has attempted to nest on the Space Needle at the Minnesota State Fair grounds a few blocks away. In 2006 and 2007 she laid eggs but unfortunately none hatched. Maybe we will get lucky this year and then I will have some young peregrines to take pictures of.
Posted by Ecobirder at 3:18 AM

Rock dove on the menu today I see :)

It's what's for dinner