Last Saturday I participated in the Red Wing area Christmas Bird Count. This was my third CBC, the first two were the prior weekend in Duluth and Two Harbors. This was kind of different situation because this count circle had not been done since 1973, so we did not have any recent data and were not sure what to expect. Unfortunately the weather was not great for birding and even worse for taking pictures.
I had spoken with our group leader, Jim Ryan the night before and we decided that the three of us, Jim Gay was the other member of our group, would meet near my house and then car pool down in my truck. So we met at around 6:00 am and headed south to Red Wing to meet with the rest of the count group. The roads on the trip down were a bit slick but not to bad. The fog was another story. There was several occasions when we would be driving with fairly good visibility and then hit a wall of fog and I would need to slow down to about 10 mph because I could barely see the road in front of the truck hood. Despite the fun driving conditions we made it down to the rendezvous location on time and with out incident. At the rendezvous location we found out from Laura Coble, the Red Wing CBC coordinator, that several people had to cancel because many of the roads to the west of Red Wing were iced up and they could not get through safely. Since several areas in the count circle were left with out anyone to count in them we decided that we could cover a second area. So around 7:30 am or so we took of and headed to our first area.
Our first zone was south west of Red Wing and west of Frontenac. It consisted mainly of farm fields with a few roads running through, so we spent most of our time in the truck driving around. With a lot of farms and fields we spotted a lot of juncos, chickadees, tree sparrows, starlings, pheasants, and pigeons. We also spotted a few more interesting birds. 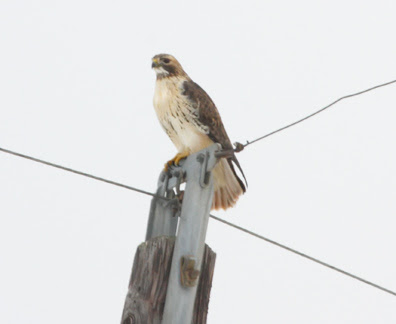 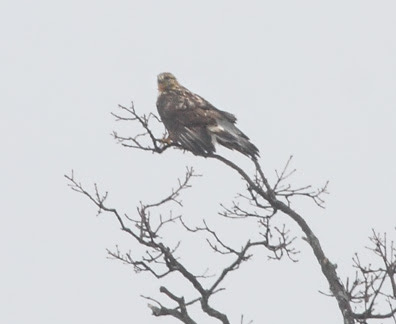 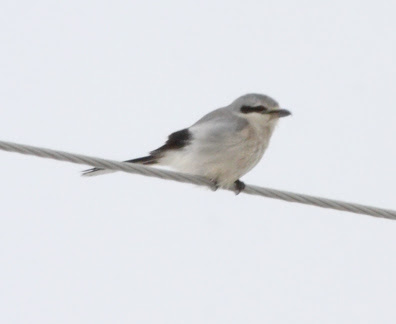 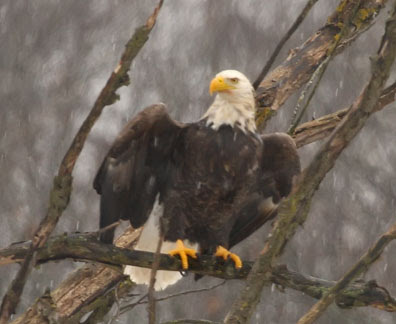 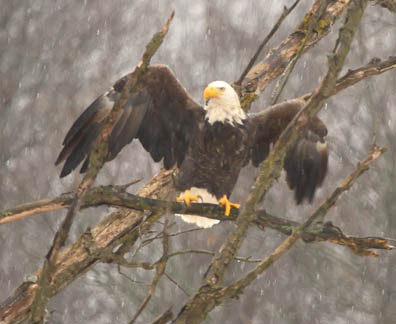 It snowed for quite a bit in the morning, the very wet snow flakes made it difficult to shoot, so my camera stayed packed most of the time until the snow stopped but I could not pass on these shots. 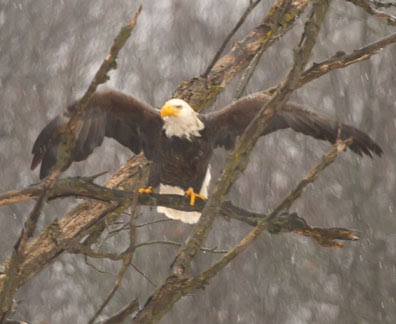 We completed our first zone around noon and then met back with the group at the afternoon rendezvous. By this time all the snow had stopped and the fog had lifted. It was still very overcast but the temps were fairly warm as we headed out to our second area.

The second zone covered the Frontenac area. It consisted of the small residential areas of Frontenac and as well as the state park. We started off touring through the residential areas, stopping to take a closer look at any of the active feeders. Near the feeders we saw juncos, cardinals, chickadees, gold finch and house finch. 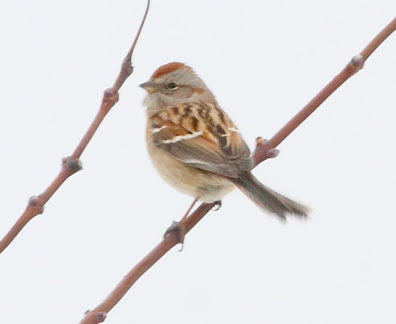 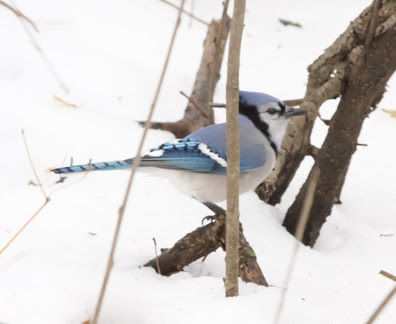 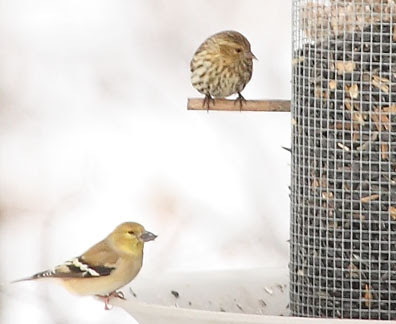 and pine siskin at some of the feeders. 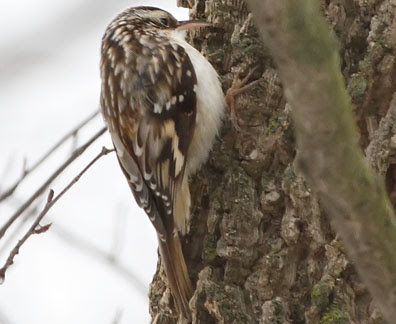 Near one of the cemeteries we were excited to find a couple of brown creepers. They were the only 2 creepers that were found on the count.

In the Frontenac State Park we spotted another rough-legged hawk, a flock of nearly 100 robins over by the Villa Maria, and a couple bald eagles near the river. We even hiked out to sand point but we did not find much other then a hairy woodpecker. 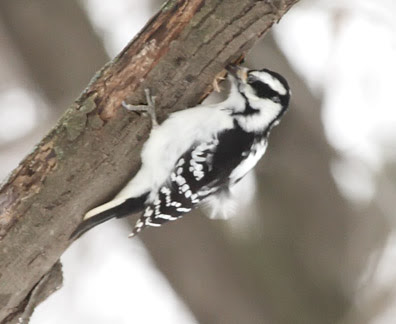 When we finished the second area we headed back to Red Wing to meet for the compilation. I still had some holiday stuff to take care of plus we were all pretty beat so we did not stay long. According to an e-mail from Laura Coble the final numbers were 46 species found by 17 birders. The record for this count from 1905 to 1973 was 49 so considering the conditions I think that we did well. The more interesting sightings included:

Most of my birding has been alone or with my wife, so going out with other birders has been kind of a new experience for me. It has been fun and I am learning a lot. Hopefully I will get a chance to go out birding with Jim and/or Jim again in the future.

Posted by Ecobirder at 5:09 PM

Nice report, Jeff. (It's Jim Ryan, AKA AikiBudo) I enjoyed birding with you as well, and Jim G too. You guys are good. I took it for granted until just before our experience but the last count I was in I was NOT driving and I am used to driving or birding with Steve Weston, who drives like I do. You know when to go fast and when and where to slow down to look for birds and when to stop too. And though your main tool was your camera, you are quite good at spotting birds while driving. This is a key skill when doing CBCs! Jim G was also a welcome addition. He said he wasn't so good but was too modest. Winter birding is its own thing, and most of the birds ar e seen in concentrated fashion, much more so than spring, summer and fall. Knowing where, when and how to spot them just comes with practice.

I'd enjoy birding with you again anytime. You also are indirectly encouraging me to get a camera - something I gave up long, long ago. It would be fun but I am concerned the passion of it would consume all the rest of my free time that birding does not! Guess I'll need to quit my job!

Thanks Jim. Most of my birding experience has been photographing raptors. So I am used to doing a lot of driving and stopping to get my shots. On Saturday I got to drive with Steve for the Hastings CBC, except we ended up spending about half of our time on foot.

I would definitely encourage anyone who was into birding to get a nice camera and start taking some pics. I have been getting quite a few questions about my camera lately so I will try and put together a post about my equipment. I am also planning a post on advantages and disadvantages of a digital SLR versus digiscoping. The long winter months will probably be a good time for these types of posts. Don’t worry about losing a lot of free time; bird photography does not take much more time then what you are already spending out birding. With the new digital cameras the pictures download quickly and are pretty much ready to go with just a little cropping. Now if you really want to lose all of your free time, then start a blog, trust me. LOL