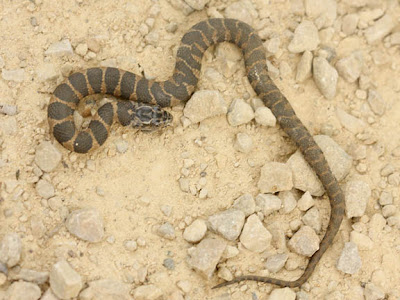 Minnesota is not a place that has a lot of snakes, but over the past couple years,as I have been expanding my repertoire, I have been fortunate enough to find snakes to photograph on occasion. This little beauty is a northern water snake which I found and photographed in the Minnesota Valley National Wildlife refuge in the summer. 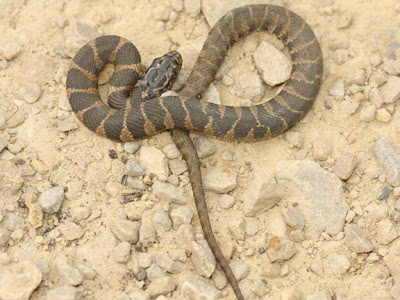 The northern water snake is usually found near water, in this case the Minnesota River as well as numerous ponds are in the area. When I found this snake it was on the dirt path probably trying to sun itself. Since snakes are cold blooded they rely on the sun to help regulate their body temperature. The northern water snake is found in the south east portion of Minnesota. It is not venomous but is similar in size and color to the massasauga, which is venomous and also found in the southeast portion of the state. It is pretty easy to tell the difference between the two snakes though since the northern water snake does not have a rattle.

Handsome! I don't see too many snakes, much to my dismay. An occasional garter is all.

Interesting post.
It's very thoughtful of the massasauga to have a rattle don't you think....
We have lots of snakes over here, some very venomous but none of them interested in an encounter with humans.

Have a good weekend, Boonie

Lovely patterns! I steer clear away as I can't tell the difference between grass snakes and poisonous adders over here...

Thanks for the lesson as these are not native snakes to Texas--- I like learning something new. Kudos!

Great shot - he looks kind of scary to me!!!

Snakes can be very handsome--and fascinating. We used to have a diamond-back water snake that sunned itself on our dock. It looked like the poisonous rattle snake but was not, and had no rattle of course. I am assuming these are related snakes to your northern water snakes.
I enjoyed your blog! I'll stop by again.
Kay