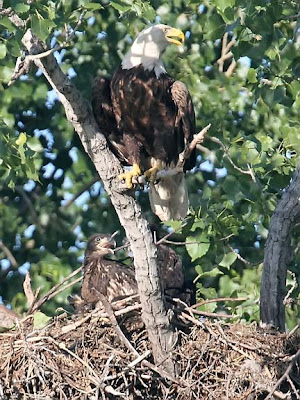 Around 50 years ago the bald eagle was nearing to the edge of extinction. The chemical insecticide DDT was traveling through the natural food chain and building up in the predators, like eagles, that were at the top. DDT did not effect the eagles directly, instead it made the egg shells very thin so when the eagles sat on the eggs to incubate them they would break. With few new eagles hatching their population decreased as the older eagles passed away. DDT was banned in the US in 1972 and with increased protections the bald eagle population has made quite a rebound. They were taken of the Endangered Species List in 2007. Here in Minnesota we have the second highest nesting population of any of the states in the United States. So nests like the one above typically produce one to three new chicks each year and can even be found here with in the Twin Cities.

Your nature photos are awesome! I've only ever seen the bald eagle in captivity, not in the wild. What a wonderful thing to be able to visit them in the wild. Thank you so much for sharing.

So cool! nothing like an eagle sighting :) Thanks for sharing!

What a wonderful opportunity and so perfect for Nature Notes..Michelle