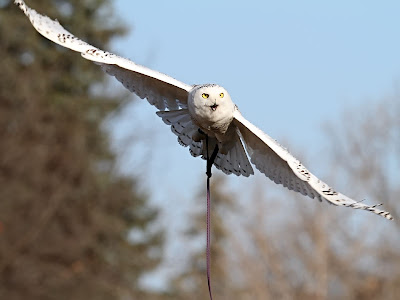 Before a raptor can be released back into the wild from The Raptor Center they need to go out with our flight crew. The flight crew attaches the bird's jesses to a long rope called a creance. They then let them fly as far as they can. This helps the bird to exercise its flight muscles and stretch out its wings. It also helps the staff and crew determine whether or not the bird is ready to be released or whether it still need more time rehabilitating. 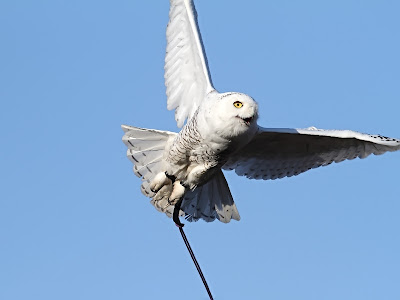 This past winter there was a substantial invasion of snowy owls through out much of the northern half of the United States. Most snowy owls typically stay up in Canada or Alaska during the winter, except for a few younger ones that may make it down into the northern portions of the United States. In the winter of 2011-2012 they migrated south in greater numbers then usual. These invasions are usually a result of a crash in their prey species, lemmings, or because they had a very successful breeding season and there are more owls then the habitat can support during the winter. It is believed that the second reason was the case this past year. Many of the migrating snowies ended up in the clinic because of starvation or they are hit by cars. In March I had the opportunity to go out and take some photos of the snowies when they were with the flight crew and then later when they were released. The photo above is a past of the 2013 Raptor Center calendar which will be available for sale next week.

The snowy owl is an amazingly beautiful creature, hope they find their way back soon

A beautiful majestic bird .... May it always fly free.

Great shots and most interesting information on the bird.

I have a strong thing for owls... I found feathers (http://lunedemaledaumon.blogspot.fr/2012/09/lot-de-consolation.html), and I love when I can observe them (which happens a lot, I'm very lucky on that matter).

I love it - this bird is so pretty!

Your owl shots are always my favourites - what beauties.

Gorgeous owls, and great info! There was much debate around snowy owl conversations here with some acquaintances on where the snowies live & sightings of them in northern MN. Thanks for this explanation!