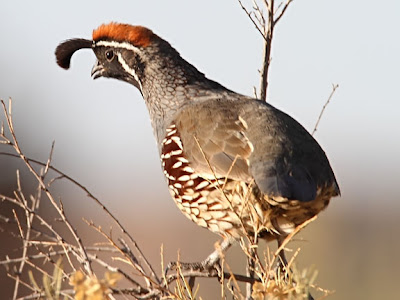 One of the birds that we had the opportunity to photograph for the first time when we were down at the Bosque del Apache in New Mexico last year was the Gambel's quail. Named after the 19th century naturalist William Gambel the Gambel's quail is a non-migratory species that lives in the southwestern United States. These birds are almost always seen running across the ground and rarely in flight. They spend most of the year in groups called coveys, except. during the breeding season when they break into mated pairs and are very territorial towards other birds.

love that colourful head and feathers on the head

A really cracking bird. Not one I've seen, but I'm very impressed with it.

Colorful and looks bigger than I imagined a quail! It's a very attractive bird!

Not seen a quail like this before. Such unusual head feathers.