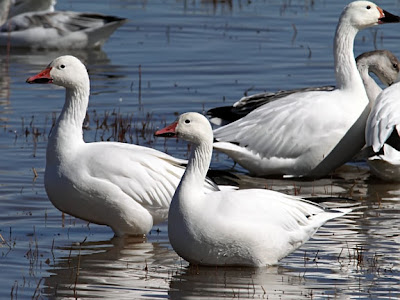 Snow geese are one of the most abundant waterfowl in North America. They breed up in the arctic and subarctic regions of Canada, Alaska, Siberia and Greenland. They nest on the tundra typically near ponds or other shallow wetlands. The nest is a scrape that is usually protected by vegetation and rocks. The female will add her own down feathers to the nest. She may also add other vegetation as she continues to lay eggs. The clutch size is typically 2- 6 eggs. When the eggs hatch the chicks already have their eyes open and they are protected by a layer of down feathers. 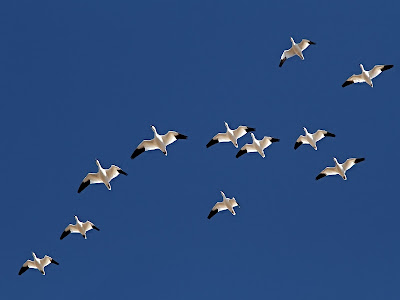 After the chicks hatch the families move to areas where their is more food. They eat grasses, shrubs, and other vegetation. They eat all parts of the plant including stems, leaves, roots and seeds. In the fall they gather together and migrate south for the winter. While migrating down the four major migration flyways flocks of snow geese will stopover at staging grounds to feed. While feeding they typically have a look out that will call out if a predator, or crazy photographer, approaches. This will usually cause the flock to take off. They winter in the southern portions of the United States. These photos where taken at the Bosque del Apache in New Mexico where typically 20,000 or more snow geese spend the winter.

I just love the coloring on the underside of their wings...so unexpected when you see them grounded.

Beautiful birds and such a joy to see the flocks in flight!

Calling by from ABC Wednesday,letter K, fear I may have got the wrong link though! Never mind I enjoyed the post and your lovely photos. :)

I was lucky to see one land and take a drink from the pond last spring. Beautiful photos...Michelle from Nature Notes..