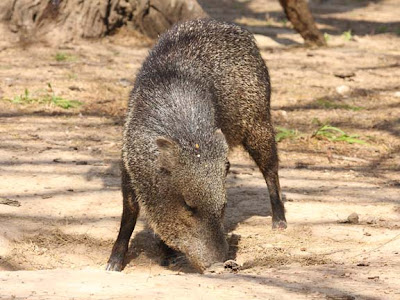 At first glance some people mistake a javelina for a wild pig but it is really a peccary. The peccary is a relative of the pig, both are in the same suborder Suina, but the peccary is a member of the Tayassuidae family and pigs are in the Suidae family. Both javelina and pigs have snout shaped noses, small eyes, and walk on their middle two digits but javelina have a more complex stomach that is nonruminating and javelina have short straight tusks while pigs have longer tusks that curve. Javelina are found from the southwestern United states down through Mexico and Central America and through much of South America. They are omnivores and eat roots, seeds, fruit, cuctus, insects and small animals. Javelina are much more wild then their pig cousins. Although they are raised in some places as food they have not been able to be domesticated. They are often very aggressive and herds of them have been known to injure or kill people. We photographed this javelina at Bentsen State Park in south Texas.

I made the same error at first glance.
ROG, ABC Wednesday team

Interesting breed. Sure does look like a pig.
Ann

I really thought it was a wild boar! Very interesting. I 'd never heard of this animal before,
Have a great week.
Wil, ABC Team.

We have had to shoo them away from my Mother In Law's home in Arizona a couple times over the years but they were very small ones. I know better than to go out and challenge an adult Javalina! I like them just fine,from INSIDE the Wagoneer! I admit I do have a 50% Javalina on the wall above my desk,her name is " Olivia De Javalina" ;)

We've was required to shoo them away via my own New mother Within Law's home within Arizona ( az ) a couple times through the years but they had been small ones. I am aware superior to to go out and about as well as concern a grown-up Javalina! I like all of them okay
runescape gold
Final Fantasy XIV Gil